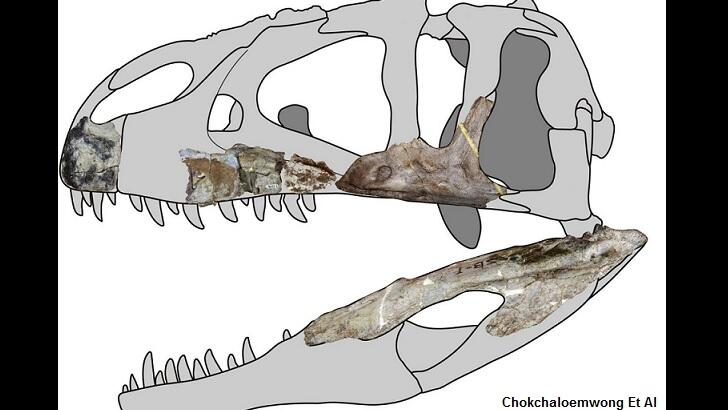 Researchers studying fossils found in Thailand say that the bones belonged to a heretofore undiscovered species of carnivorous dinosaur that appears to have been particularly fearsome. Dubbed 'Siamraptor suwati,' the ancient creature reportedly measured around 26 feet long and weighed approximately three-and-a-half tons. Belonging to a group of predatory dinosaurs dubbed carcharodontosaurs, the monstrous beast sported a mouth full of shark-like teeth that were used to tear its unfortunate prey apart with ease.

Believed to have roamed the region around 115 million years ago, the Siamraptor is the first carcharodontosaur to be discovered in Southeast Asia. By virtue of its enormous size and prodigious killing ability, scientists say that the creature was likely the apex predator of the area where the fossils were unearthed. Researchers were able to establish the existence of the species by way of bones from various parts of four separate specimens of the creature.

In a press release announcing the publication of a paper on their research, the scientists who discovered the Siamraptor say that it was probably "a very early evolutionary split" from the larger carcharodontosaur group of dinosaurs and, therefore, it allows for a greater understanding of how they developed over time. Beyond that, since the creature was the first of its kind to be found in Southeast Asia, it dramatically expands the territory believed to be ruled, so to speak, by the carcharodontosaur as their fossils had previously only been found in Europe and Africa.