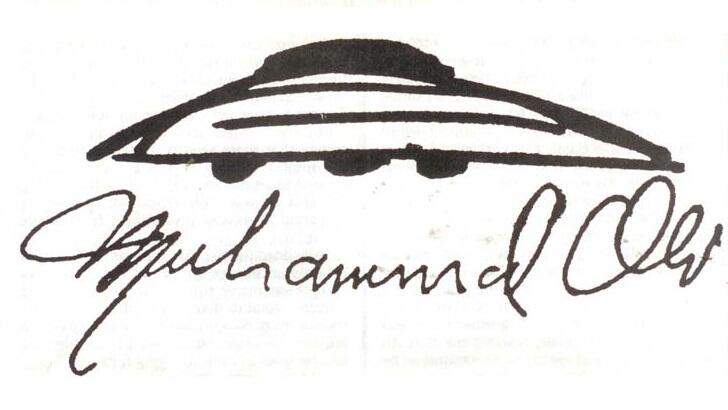 The passing of iconic boxer Muhammad Ali on Friday has inspired an outpouring of tributes and remembrances of 'The Champ,' including some enlightening insights from UFO researcher Timothy Green Beckley.

In a heartwarming post at his blog, Beckley recalls his multiple meetings with Ali, where the two discussed the boxer's numerous encounters with UFOs.

"Ali tied in his sightings with his religious affiliation with the Nation of Islam and believed that the ultimate UFO was a giant wheel in the sky," Beckley writes.

He also includes an excerpt from his book Shirley MacLaine Meets The Pleiadians, which details his conversations with Ali about the enigmatic phenomenon and the boxer's own intriguing sightings of unidentified craft.

Beckley recounts visiting Ali at his Cherry Hill, New Jersey home, where the shared the story of seeing a pair of UFOs while working out in a New York City Park.

"I happened to look up just before dawn, as I often do while running, and there hovering above us was this brilliant light hanging as if by an invisible thread," Ali told Beckley, noting that he thought the object was a helicopter until another UFO flew into view.

Ali's tale was met with derision from sports reporters who heard it, but he stressed to the UFO researcher that he was quite serious about the sighting.

In fact, he amazingly revealed to Beckley that he had an astounding 15 UFO sightings prior to the encounter in New York City.

According to Ali, his experiences with UFOs appeared to be more than mere happenstance as he confided in Beckley that he believed the ETs were watching him and that he once encountered an alien in the Florida everglades!

Ali even drew a rough sketch of what he believed to be a UFO 'scout ship' (seen above) which Beckley included in images shared with C2C for his 11/12/2008 appearance on the program.

Beckley's lengthy tribute to 'The Champ,' including a plethora of additional stories about the famed boxer's UFO experiences and thoughts, can be found at Spectral Vision.

And Coast Insiders can hear Beckley discuss celebrities and UFOs on the 6/16/2015 edition of the program.