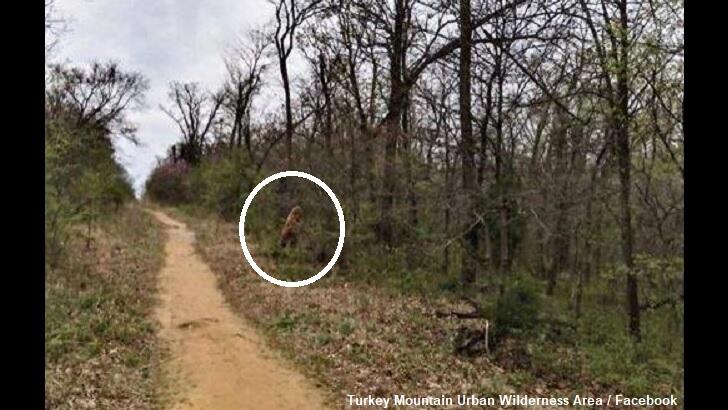 Several people visiting a hiking destination in Oklahoma over the weekend claim to have spotted what they believe may have been Bigfoot. The weird spate of sightings occurred at the Turkey Mountain Urban Wilderness Area, which is a spacious piece of undeveloped land in Tulsa that has become a particularly popular outdoor escape for residents who have been exercising self-isolation at home in response to the coronavirus crisis.

However, it would seem that those who recently ventured to the site got more than merely a breath of fresh air. According to a social media post from the administrators of the wilderness area on Monday afternoon, "over the weekend, we received dozens of calls and messages reporting a 'sighting.'" Attached to the statement were a series of visitors' photographs, of varying quality, that appeared to show a hairy bipedal creature lurking in the wilderness.

Promising to "investigate the matter," the group went on to use the odd post to remind residents that social distancing guidelines of six feet were required when visiting the location. As for what people may have seen at the site over the weekend, aside from a genuine Sasquatch, one realistic possibility is that they simply encountered a creative individual wearing a Bigfoot costume as a prank. What do you think the hikers at Turkey Mountain encountered? Share your theory with us at the C2C Facebook page.