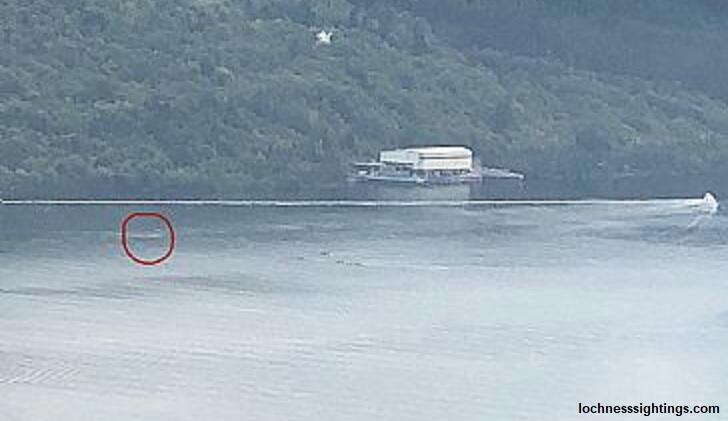 In a year in which on-location sightings of the creature have been few and far between, multiple visitors to Loch Ness over the past month have reported seeing the site's legendary monster. According to a local media report, the most recent encounter reportedly occurred this past weekend when Corey and Lauren Sturrock spotted what they described as an anomaly "the size of a bus" emerge from the water. Speculating that the creature was a massive eel, Corey lamented that "by the time I got my phone out it had gone underneath again."

More fortunate was a witness named Monika, who reportedly photographed what may have been the final moments of a Nessie sighting (seen above) back on September 15th. According to her, she had been sitting outside of a farmhouse overlooking the picturesque site when "something caught the corner of our eye on the lake near the opposite shore." Specifically, she noticed a dark shadow that "broke through the surface just slightly." By the time Monika was able to take a picture, she was only able to capture what the water looked like right after the oddity sunk below the surface.

The third report this month came by way of an area resident who claims to have seen "a very defined dark shape beneath the water" on the first of the month. A self-described Nessie skeptic, the man mused that "I have known the loch very well since my youth and I know how strange shapes can appear in wave patterns on breezy days that fool people and are mistaken for something more fanciful. This was nothing like that." Suspecting that he may have seen the legendary monster, the man opted to remain anonymous for fear of being ridiculed.

As of now, the Official Loch Ness Monster Sightings Register has only accepted Monika's report in their database, making it the 8th case of 2020 and just the third recognized on-site encounter this year. That said, if we take into account the anonymous witness from the start of the month and the Sturrocks' report from this past weekend, it would appear that perhaps Nessie is trying to make up for lost time after visits to the location were largely prohibited throughout the spring and summer due to pandemic-related travel restrictions.