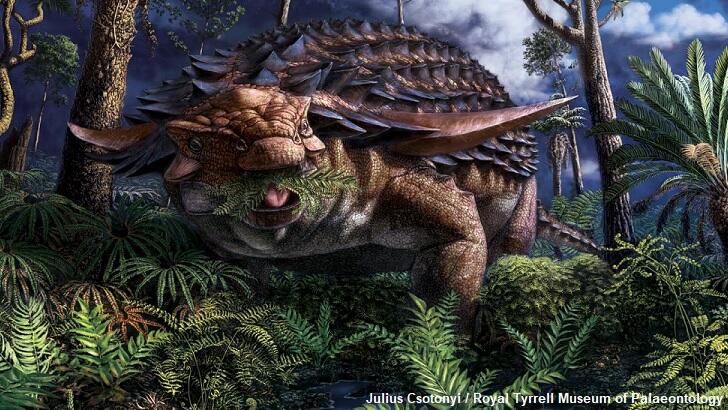 Scientists studying the mummified body of an armor-plated dinosaur were surprised to find that the creature's last meal was still inside its remarkably well-preserved stomach. According to a press release, the monstrous ankylosaur is believed to have roamed western Canada over 110 million years ago and its remains were discovered in an Albertan mine back in 2011. The find was particularly intriguing to researchers due to the excellent condition of the creature's body and internal organs, specifically the stomach.

To that end, geologist Jim Basinger marveled that such a find is "extraordinarily rare" and that this specific case constitutes "the best-preserved dinosaur stomach ever found to date." Discerning the diet of a dinosaur generally involves a fair amount of scientific guesswork involving plants and animals thought to live in the region where the creature resided as well as dental analysis. However, very little speculation is needed when it comes to the mummified ankylosaur, since scientists were able to examine the contents of its stomach and see the long-dead dinosaur's last meal.

Researchers say that the stomach contents of the creature consisted of "88 percent chewed leaf material and seven percent stems and twigs." Incredibly, the material was so well preserved that they were able to determine what specific plant and conifer species the animal ate for the final time. Additionally, the presence of a considerable amount of charcoal in the stomach indicated that "the animal was browsing in a recently burned area and was taking advantage of a recent fire."