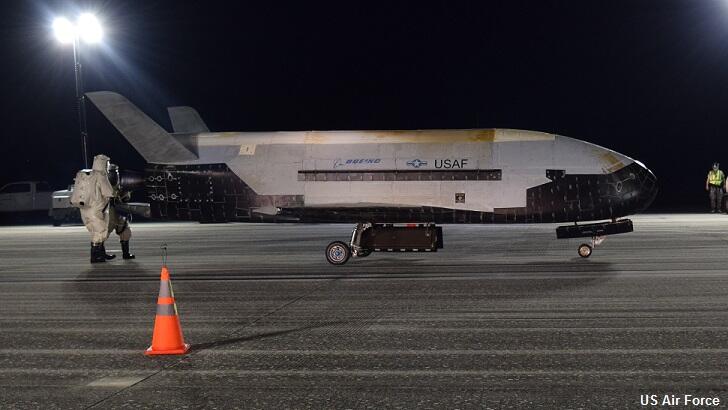 A mysterious space plane belonging to the United States Air Force reportedly returned to Earth on Sunday following a record-breaking 780 days in orbit. Known as the X-37B Orbital Test Vehicle, the curious craft was launched via a Space X Falcon 9 booster back on September 7th, 2017. This particular flight was the fifth such mission for the space plane and, a few months ago, it smashed the previous endurance record for the vessel which stood at 718 days in orbit.

Resembling the iconic Space Shuttle, but measuring a mere 29 feet long, the solar-powered reusable craft has long been the subject of speculation since its mission and payloads are highly classified. Additionally, it's origin as a project developed by NASA, but then taken over by DARPA before becoming the responsibility of the US Air Force has also spawned all manner of suggestions as to what its purpose might be. Some conspiracy theorists have posited that perhaps it is some kind of spy plane, while more fantastic researchers have put forward the idea that the X-27B is somehow connected to the UFO phenomenon.

Alas, an Air Force press release announcing the completion of the X-37B's latest mission provided little in the way of solid answers and just enough vague hints to maintain the craft's cryptic reputation. To that end, the statement declared that "this mission successfully hosted Air Force Research Laboratory experiments, among others, as well as providing a ride for small satellites." What, exactly, was being done aboard the space plane as well as the nature of the satellites it deployed were unfortunately not revealed to the public. Be that as it may, it would seem that the return to Earth is merely a brief respite for the craft as it is set to be launched back into space next year for what one assumes will be another mysterious marathon mission.