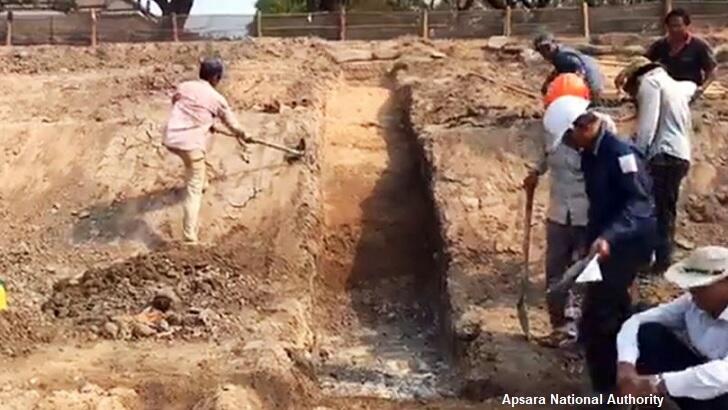 A restoration project at the Cambodian Hindu temple complex known as Angkor Wat inadvertently led to the discovery of a mysterious thousand-year-old structure. According to a local media report, the curious wooden building had heretofore been hidden at the bottom of a pond. This particular location is a popular stopping point for tourists as it provides for breathtaking images of the famed temple's reflection by way of the water.

With that in mind, officials had hoped to clear away some of the sediment that had accumulated in and around the pond due to considerable foot traffic at the spot over the years. However, as they began digging into the dirt, they were stunned to find something wholly unexpected. "At first, we noticed a wooden pole buried at the bottom of the pond and didn't quite know what it was," explained Im Sokrithy of the Angkor International Research and Documentation Center.

Their interest piqued by the puzzling find, archaeologists working at the site continued digging around the anomalous pillar and eventually realized that it was a small part of a much larger wooden structure. To say that the discovery is one of a kind may be an understatement as Sokrithy marveled that "we have never seen such a thing in any other place, and especially not in Angkor Wat. Khmer and foreign archaeologists have been researching Angkor areas for more than 150 years, but we have never discovered anything like this."

Although the nature and origin of the building have yet to be determined, researchers at the site theorize that it could be 1,000 years old. Archaeologists hope to further excavate the area and ultimately get a clearer look at the structure in the hopes of unlocking whatever secrets it may possess. The intriguing discovery is a testament to how there are still a great many mysteries waiting to be found hidden beneath our feet around the world.