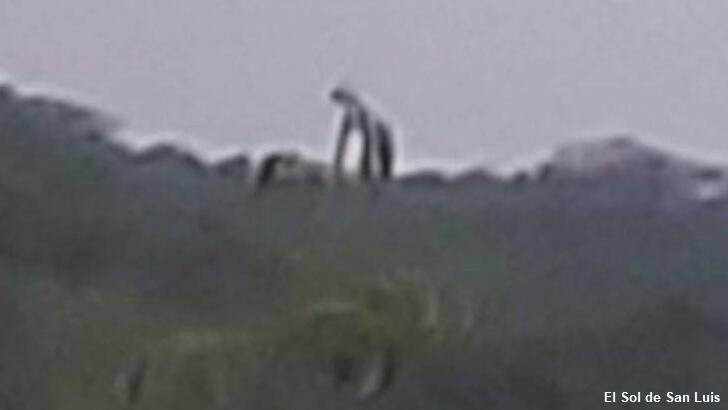 Residents of a community in Mexico are on edge following the sighting of a mysterious 'giant' that some suspect could have been either a Bigfoot or an alien. The eerie incident reportedly took place last week on a communal piece of farmland near the city of Ciudad Valles. A witness to the weirdness, identified only as 'Mrs. Antonia,' said that the sighting took place at around 5:30 in the afternoon as she and her husband were playing with their child.

The group were taken aback when they heard a sound resembling an explosion that seemed to have come from a hill on the property. Thinking that an avalanche was about to occur, they looked over at the spot from where the sound emanated and were stunned to see what was described as a "tall, thin man" that Antonia likened to "a giant." Although her husband initially made fun of her for being scared, she said, when he also quickly became frightened when he spotted the mysterious visitor.

The witnesses were able to snap a few photographs of the creature, one of which can be seen above, however it is difficult to decipher what, exactly, is perched atop the hill. Nonetheless, word of the incident has spread throughout the region and raised concerns among residents. Indigenous elders in the region are said to be quiet about the case, but are rumored to have suggested that the eerie interloper could have been an alien or is somehow related to the coronavirus.

Others have put forward the possibility that it could have been a Bigfoot, but the famed cryptid is actually not a part of local legend in the area, where the infamous Skinwalker appears to be a more frequent suspect for similar bizarre encounters which would be attributed to the Sasquatch here in America. With all that said, what's your take on the puzzling photograph? Is it an alien, a Bigfoot, or merely a misidentification of some kind? Share you theory at the C2C Facebook page.