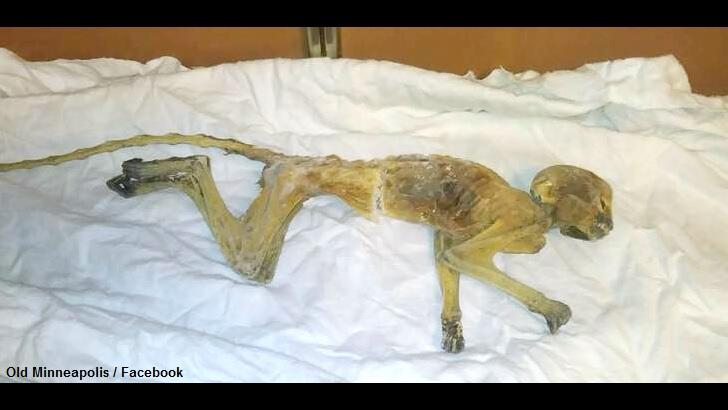 A construction crew renovating a 116-year-old building in Minneapolis unearthed the mummified remains of a monkey and no one has any idea how it wound up there.

The strange discovery was made by workers at the site of what was once the flagship location of the Dayton's department store chain in the city's downtown.

A person involved with the project subsequently passed along an image of the oddity to a Facebook group devoted to celebrating Minnesota's history.

The weird find has left many wondering what the monkey's origin story may have been and what circumstances led to its untimely demise in the ceiling of a pretty massive department store.

The two more prevalent theories are that the creature escaped from an exotic pet sale that was held at the store in 1963 or possibly a pet shop once located on the premises.

Perhaps the most amazing aspect of the tale may be that this might just be an urban legend, of sorts, come true.

That's because a maintenance worker who spent five decades at Dayton's once told a fellow employee that, indeed, a monkey had managed to find a way out of the pet store and wound up in the ducts of the building before falling victim to an exhaust fan blade.

While we're guessing that the person who had been told the story had a good chuckle about the unbelievable nature of the tale at the time, it seems that it's the maintenance worker who is getting the last laugh.