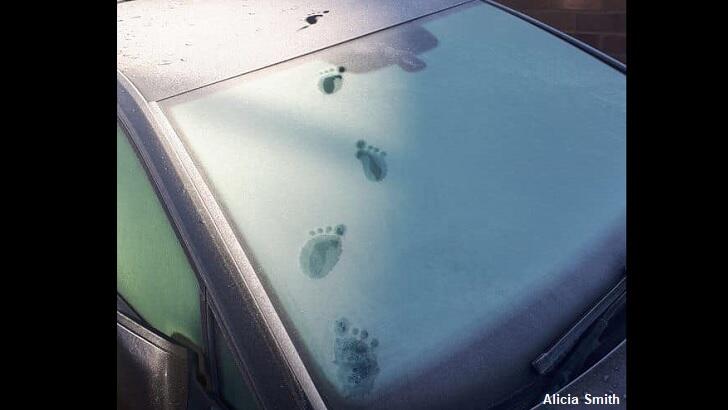 A woman in England was left scratching her head when she discovered a puzzling trail of four-toed footprints had appeared atop her frost-covered car. According to a local media report, Alicia Smith noticed the curious markings when she headed out to her driveway in the community of Scartho last Thursday morning. Spanning the front windshield and roof of the vehicle were what appeared to be six footprints sporting only four toes.

Bewildered by what she had found, Smith subsequently posted photos of the odd scene to social media, marveling that she and her partner had "never seen anything like this before, it was very odd." She went on to note that "they're a strange shape and only have four toes, and don't quite look human." As for what could have made them, Smith initially speculated that perhaps they were left behind by a child, but expressed skepticism at her own hypothesis since it was clearly rather cold the prior evening and, as such, "why would someone be barefoot in this weather?"

Given the four-toed nature of the strange prints, some have suggested that perhaps they were produced by some kind of supernatural creature of the elvish variety, which might explain how the bare feet would be able to endure such frigid conditions. More skeptical observers have argued that the markings were merely a clever hoax created by hand. With that in mind, what's your take on the odd discovery? Share your thoughts with us at the Coast to Coast AM Facebook page.