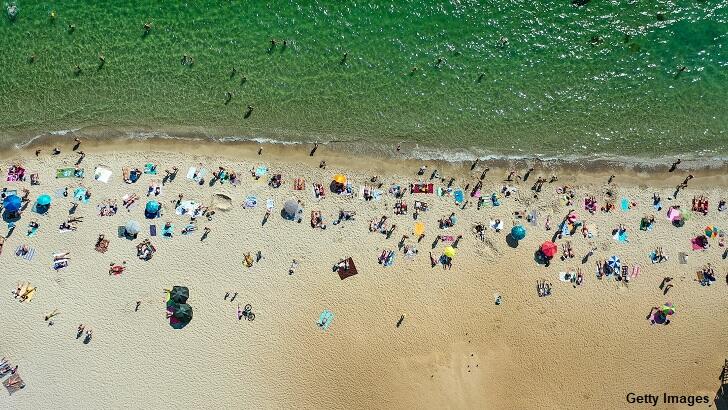 Lifeguards at a beach in England ordered swimmers to return to shore after an unidentified and rather sizeable sea creature nearly capsized a fisherman's boat. The weird incident reportedly occurred on Wednesday afternoon in the community of Boscombe, which sits on the shore of the English Channel. What one assumes began as a pleasant day at the beach, turned into a concerning situation when multiple people reported seeing a large creature lurking out in the water. "There were some splashes in the water," recalled one individual who witnessed the weirdness unfold, "and the lifeguards said they hadn't seen anything like it in 35 years."

Lifeguards subsequently ventured out into the water in an attempt to locate the creature, but they were unable to find anything that could explain the strange sightings. However, there appears to be little doubt that something big made its presence known as a fisherman who was out on the water says that he had an up-close-and-personal encounter with the proverbial monster. "I was pulling a lure back into shore and something grabbed that," Darron Tapper told a local media outlet, "I almost turned over in my kayak." Turning around to see what had just stolen his fishing rod, the man said that all he could see was "a big shadow" disappearing into the deep.

Reflecting on what he might have encountered, Tapper observed that "it was something big" and theorized that it could have been a shark. Although the seasoned fisherman has never seen such a creature in those waters before, he came to that conclusion because "I don’t know what else would have the power." Ultimately, Tapper expressed relief that he did not fall overboard when the animal rocked his boat, since "if you saw how it took my rod and reel I didn't stand a chance. God knows what would have happened, I looked like a seal in my wetsuit." Fortunately, the fisherman remained in his kayak with a story to tell rather than in the water, where the mystery creature may have mistaken him for an easy-to-catch snack.