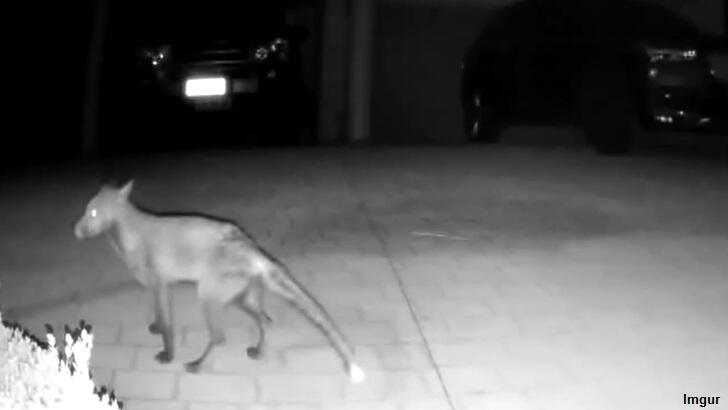 An image allegedly captured by a home security system and posted online shows some kind of mystery creature that is drawing comparisons to the legendary Tasmanian Tiger. Unfortunately, the particulars surrounding the photo are even more vague than your average time traveler video. Perhaps the only discernible detail about the image, which was posted to the photo-sharing site Imgur, is that the date is formatted in a manner suggesting that it originated outside of the United States.

Otherwise, everything else about the image is subject to speculation, but the conjecture is rather intriguing. Many observers have theorized that the creature captured by the camera is a thylacine, also known as the Tasmanian Tiger, based on its dog-like appearance and somewhat stiff tail, which is one of the prime characteristics of the animal. Scientists will no doubt say that, despite eye witness reports to the contrary over the years, the creature went extinct decades ago and so such an identification is highly unlikely.

Alas, the proverbial 'thylacine theory' requires that the photo was taken somewhere in Australia and, as noted, this cannot be confirmed. Other possibilities offered online include the notorious chupacabra or the more prosaic explanation of the creature merely being a dog with mange. And one can never discount the chance that the image is a clever hoax created using photo-editing software with the intention of fooling people What's your take on the odd image? Let us know at the Coast to Coast AM Facebook page.