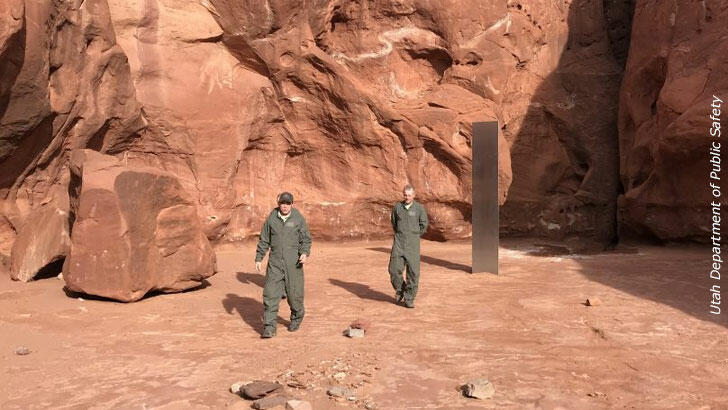 In the latest twist in the mysterious monolith story in Utah, the shiny metallic object has disappeared. The Bureau of Land Management reports that it was removed by an "unknown party," adding that "the structure has received international and national attention and we received reports that a person or group removed it on the evening of 27 Nov."

The curious structure, which has been compared to the monolith in "2001: A Space Odyssey," had begun to attract visitors and adventurers to the Red Rock desert, and two of them, Riccardo Marino and Sierra Van Meter, were perhaps the first to discover that it had vanished late on Friday night. Among the details they shared on Instagram (see below) was that they saw a truck driving away with a large object in its bed.

Some have speculated that the monolith was a piece of sculpture by the late artist John McCracken, akin to his other "plank" stainless steel works. His gallery at first confirmed that it was his, but now claims otherwise, suggesting it was another artist paying homage to McCracken. What is your theory on the monolith? Visit our Facebook page to comment.