Home > Articles > Mystery Monolith in Utah Located on Google Earth and May Be Removed
November 25, 2020 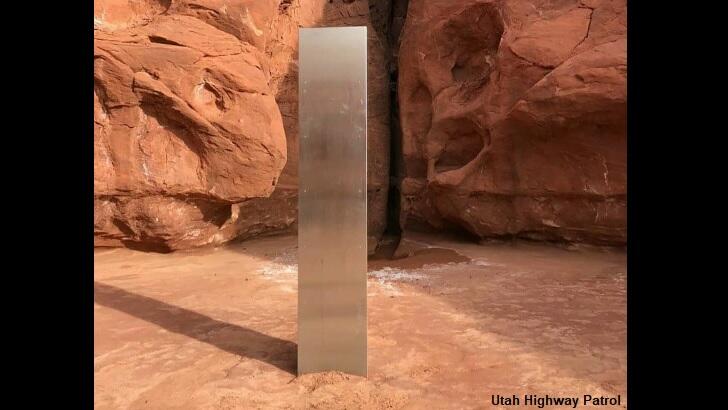 In a pair of developments surrounding the mysterious monolith found in the Utah desert, online sleuths have managed to located the odd object on Google Earth and officials in the state say that it may not be around much longer because it is actually illegal. The ten-to-12-foot tall metallic enigma sparked worldwide headlines earlier this week when news of its discovery was revealed. Fueling all manner of speculation as to its origin and purpose, at least one question about the monolith has reportedly been solved: its location.

Although the precise spot in the desert where the object had seemingly been planted had originally been kept secret by officials in Utah for fear of curious thrillseekers attempting ill-equipped visits to the site, their reticence was no match for the diligence of online detectives, who managed to find the location using Google Earth. Amazingly, based on images from the service, it would appear that the monolith was installed between August 2015, when it does not appear on satellite photos, and October 2016, which is when it can first be seen. This would mean that the curious object has been sitting in the desert waiting to be discovered for years and was seemingly only stumbled upon in the last week.

Now that it has been found, however, its time may quickly come to an end. That's because officials with the Utah Department of Public Safety noted that placing an art installation on "federally managed public lands" is actually illegal. They went on to say that they are investigating the matter and, presumably, could opt to remove the monolith in order to stop it from becoming somewhat dangerous tourist destination. Given the furor surrounding the object, one hoped that its origin and purpose would eventually be revealed, but the potential problems which could befall its creator should they come forward suggest that we might never know the answers to those questions.