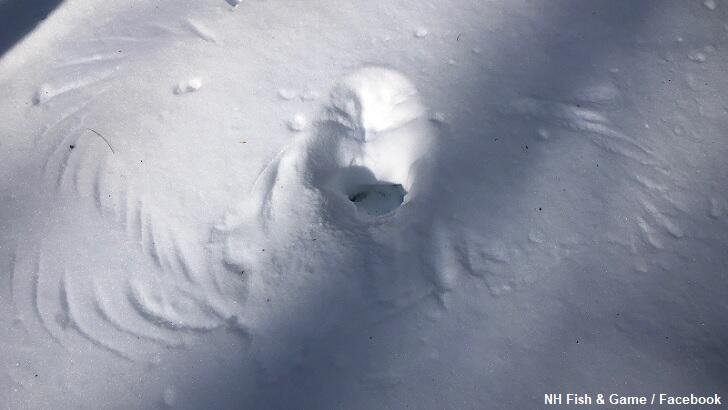 A biologist exploring a snow-covered patch of wilderness in New Hampshire noticed a solitary impression in the snow that left social media users scratching their heads. The odd marking was reportedly discovered by a scientist from the New Hampshire Fish and Game Department last week and a picture of the puzzling sight was subsequently shared by the agency on their Facebook page. Challenging their followers with a "winter wildlife quiz," the department asked what creature "made this imprint and what were they doing?"

The curious image spawned a slew of responses from Facebook users, who offered guesses for the source of the impression that ranged from the prosaic, such an animal either falling into the snow or burrowing up from below, to the fantastic, like a chupacabra or Bigfoot. Thankfully, the department eventually provided an answer to the proverbial pop quiz which, once revealed, makes perfect sense when one takes another look at the picture.

The marking, they said, was "made by an owl trying to catch a small mammal in the snow." They went on to explain that "the deep depression is from its talons trying to grab its prey. The top is the owl's head and then the wings on either side." Speculating that the bird's wingspan was approximately 20 inches and noting the "absence of ear tufts," the department made the remarkably specific guess that the specific creature behind the impression was a northern sawhet owl.