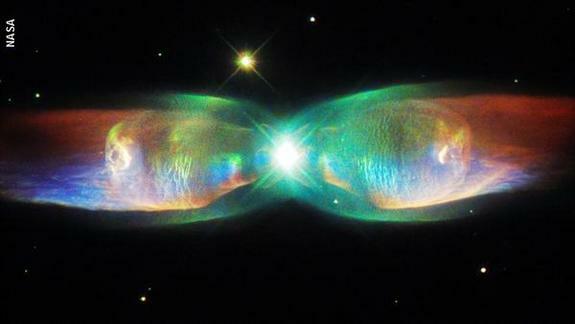 A breathtaking new image of a cosmic butterfly, a twin jet nebula, was captured by NASA's Hubble telescope. According to the space agency, the amazing color resonance and expanding gas is the last vestige of life from an older star.
Planetary nebula usually have one star at the center but the bipolar nebula or twin jet nebula has two stars which gives the illusion of butterfly-like wings. Shedding its layers as it dies, the older much-larger star exposes its core, illuminating decaying layers to create the intergalactic light show. As the larger star dies, its companion star also dies – becoming a small white dwarf star – a solar corpse.
The image may appear lovely but this cosmic butterfly has a dual-headed stinger –twin jets of gas ripping across the cosmos at speeds exceeding 621,400 miles per hour.