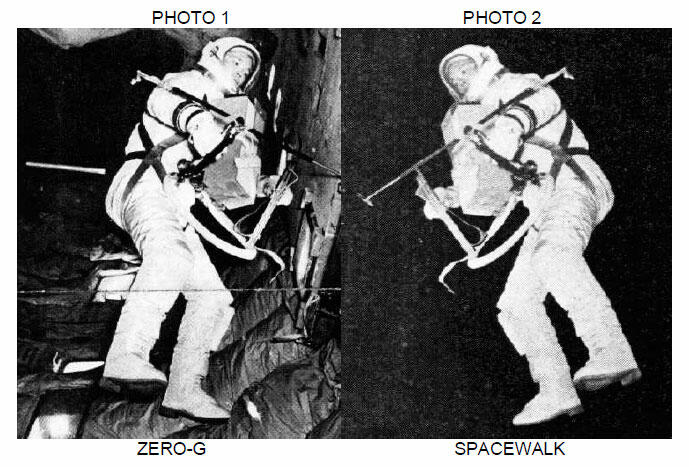 Dr. Stephen Rorke has provided the following text and photo to accompany his appearance on tonight's show:

Photo 1 is from the book "Carrying the Fire" by Astronaut Michael Collins. It shows Collins in a no-gravity test inside an airplane. Collins is practicing for a space walk inside an aircraft (flying a zero-g loop to temporarily eliminate gravity). Collins is seen holding the jet reaction propulsion rod in his right hand.

Another famous photograph has Collins holding the jet reaction propulsion rod with his left hand while outside his Gemini 10 capsule -- he is, according to Collins and NASA, out in space on a spacewalk in Photo 2. That photograph is NASA picture #66-40127. Photo 2 is also from "Carrying the Fire" and is allegedly of a Gemini 10 space walk.

Ralph René noticed the two photographs were essentially identical- save the fact it appeared the negative had been reversed for the 'space walk' shot and background features of the interior of the aircraft blacked out. René wondered why NASA would have to fake an image of a spacewalk? And, he thought, if the Gemini record of a spacewalk is in doubt, why shouldn't the moonwalks be held to the same scrutiny?