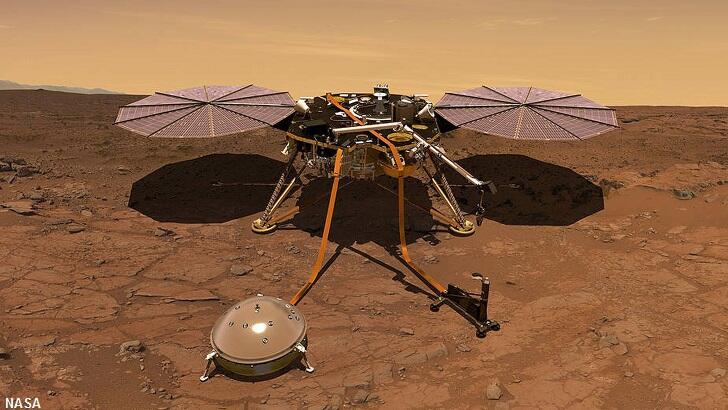 After a long journey from Earth and a harrowing few minutes plunging through the atmosphere of Mars, NASA's InSight lander successfully touched down on the Red Planet this afternoon (view first image). The remarkable spacecraft, which cost a whopping $850 million, is designed to study the interior of the planet and, hopefully, provide scientists with a wealth of new insights on par with previous missions that examined the surface of Mars.

The work of the lander will be done using a number of specially-designed instruments, including a probe that can burrow up to 16 feet down into the subsurface of Mars to track heat flows. The craft is also equipped with an array of sophisticated seismometers which will be used to take readings on 'Marsquakes' and other activity brought upon by asteroids striking the planet. Another experiment tied to the lander will take measurements of the planet's rotation which should allow for scientists get a more precise understanding of Mars' core and mantle density.

Although the lander's initial arrival on the Red Planet today was a relief to NASA officials and space enthusiasts, engineers working the InSight team aren't quite ready to celebrate just yet. That's because it will still be a few more hours before scientists can confirm if the craft successfully deployed the solar panels necessary to power the whole operation. Should that critical aspect of the mission fail, the lander would wind up being little more than litter on the surface of Mars. Beyond that, scientists say that it will take months before all of the instruments are calibrated and can begin harvesting data.

Meanwhile, Mars anomaly hunters may be disappointed to learn that the InSight lander is unlikely to provide a similar wealth of weirdness like what was produced by the Mars Rovers. That's because the craft is stationary and, therefore, will not be roaming around on the Red Planet, meaning that images transmitted from the lander will largely be the same picture every time, except for when weather-related incidents, such as a dust storm, occur. Then again, there's always the possibility that an eagle-eyed UFO hunter will spot something odd passing through the Martian sky in one of the lander's images.