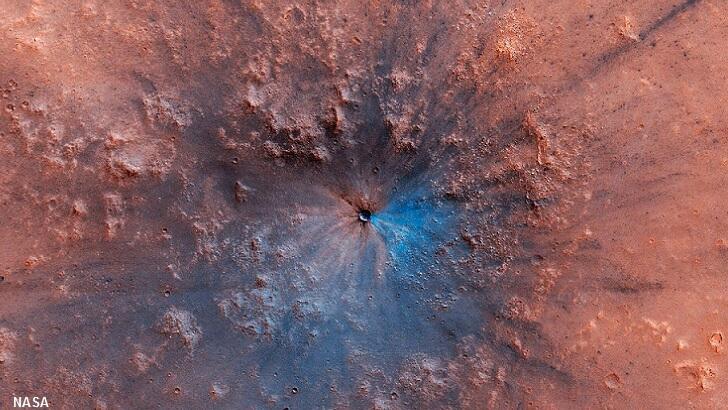 NASA's Mars Reconnaissance Orbiter recently caught sight of a curious new feature on the surface of the Red Planet: a fresh crater. The impact site, which reportedly measures around 50 feet wide, was photographed by the satellite back in April and the image was released to the public this week. Based on past observations of the area, it is believed that the crater was created sometime in the last three years.

In a testament to the awesome power of mother nature, even in space, astronomers say that the sizeable scar on the surface of Mars was probably created by a relatively small object of around five feet wide striking the planet. Of specific interest to scientists is that the blast wave from the formation of the crater is still distinctly visible in the image captured by the MRO.

Astronomers also note that the colorful impact site provides a glimpse of what lies beneath the dust which coats the Red Planet. To that end, they say that the dark areas in the image are probably basalt and, intriguingly, the blueish parts may actually be ice that was exposed to the Martian atmosphere by way of the impact. Between the breathtaking crater and last week's 'Starfleet logo,' NASA is beginning to give amateur anomaly hunters a run for their money when it comes to finding weird stuff on Mars.