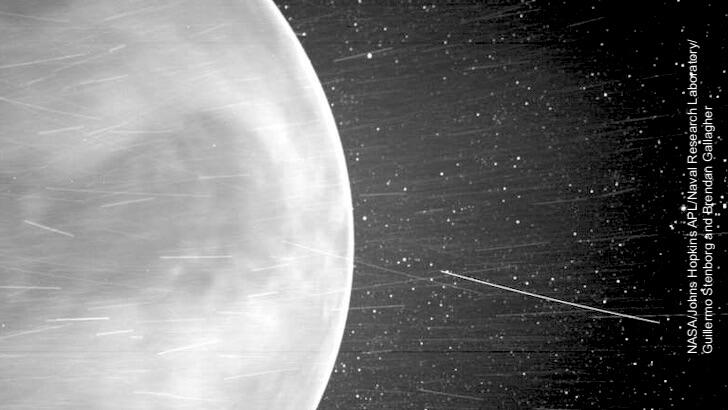 While all eyes have been on Mars this week, NASA's Parker Solar Probe, which is studying the structure and surface of the Sun, as well as gathering data on solar winds, used a close approach to the planet Venus to beam back some stunning photos, which were actually imaged last year.

We know Venus as a planet with a runaway greenhouse effect that lifts surface temperatures to an average of 864 degrees Fahrenheit and is obscured by an atmosphere of thick gases, but the spacecraft managed to actually image the highest landform on the planet. The atmosphere is so thin at that height that the geologic feature was picked up by the visible light camera. The area, known as Aphrodite Terra, experiences an average high temperature of only 85 degrees due to its altitude.

The probe's Wide-field Image camera also captured an eerie shine around the edge of the planet, which NASA says may be due to 'nightglow,' or "light emitted by oxygen atoms high in the atmosphere that recombine into molecules in the nightside."

Excited about the images, project scientist Karl Battams also tweeted about a spot on the camera lens that made it appear as if there was an anomalous feature in the Venusian clouds, saying "I see a few comments online about this blob in our Venus image - it's a defect on the camera lens (can be seen in all our data). #ItsNeverAliens”

During its mission, the Parker Solar Probe is scheduled to closely approach Venus a total of seven times in order to change its orbit around the Sun, taking it closer with each "gravity assist" maneuver.