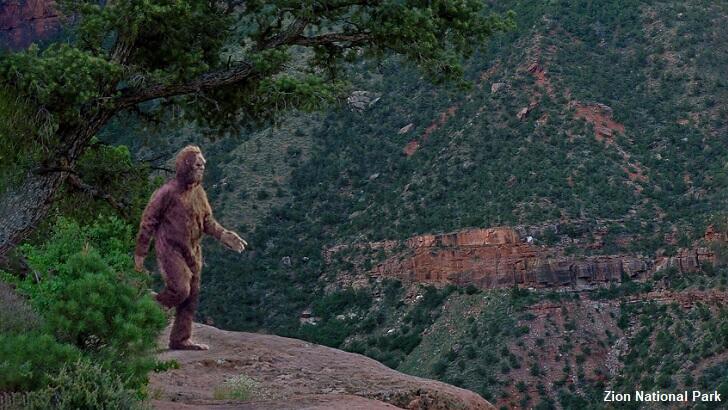 In honor of April Fool's Day, a number of national parks turned to the paranormal in an attempt to pull a fast one on their social media followers. Perhaps the most impressive joke this year came by way of Zion National Park which shared a photo (seen above) that, upon first glance, appears to show a Sasquatch visiting the site's picturesque Watchman Trail. "Though typically known to inhabit North America's Pacific Northwest region, Bigfoot, like many visitors, has chosen Zion as her destination for recreation," the park wrote on Facebook before, as is custom, revealing that the photo was a hoax.

Zion National Park was not the only location to enlist Bigfoot in Thursday's tomfoolery as Whiskeytown National Recreation Area posted a typically hard-to-decipher image which they claimed was a "close-up photo of Bigfoot" purportedly "captured by one of our former employee's wildlife cameras recently." Showing some serious commitment to the bit, they went on to say that "scientists are struggling to come up with an answer for how this unique species has moved into the park from locations west" and detailed a number of theories for the odd turn of events until ultimately unleashing the all-too-familiar April Fool's punchline.

Meanwhile, Utah's Bureau of Land Management went down a different paranormal path for the holiday by way of a tweet in which they indicated that "visitors have reported paranormal activity and supernatural disturbances on Utah BLM public lands." The 'revelation' was accompanied by a picture of a person in the desert shining a light into the sky presumably to contact alien visitors (seen below). The department went on to assure people that "officials are working with the FBI’s paranormal unit" to crack the case before pulling the proverbial rug out from under their social media followers with the requisite April Fool's reveal.