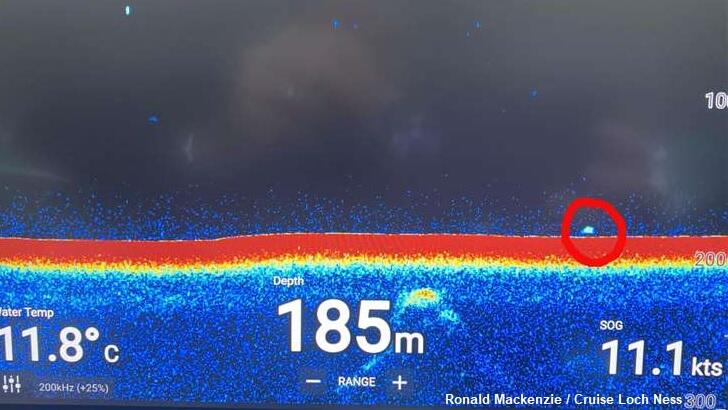 For the second time in less than a month, a boat cruising along Loch Ness picked up a curious anomaly on sonar that some suspect could be the site's legendary monster. As with the first case, which occurred back on September 30th, the potential underwater sighting was reportedly logged by Ronald Mackenzie of Cruise Loch Ness during a tour of the location on October 11th. In this instance, the sizeable anomaly was situated at a depth of approximately 600 feet and clearly stood out on the sonar return as something out of the ordinary.

The two sightings have proven to be so compelling that sonar expert Craig Wallace, who surveyed Loch Ness looking for the monster in the past, has offered to return to the site for a fresh search. Asked about the pair of images captured in recent weeks, he observed that "they are very curious. These are of course large, clear and distinct contacts, all strangely near to the loch bed." Wallace went on to note that previous surveys of the site used what is now outdated technology and postulated that perhaps another look with modern instruments could yield some intriguing results.

As with the earlier sonar sighting last month, this new image has been met with considerable enthusiasm from Nessie researchers. Calling the dual images a "game changer" that are "in a different league" from the "many rubbish sightings over the years," longtime monster hunter Steve Feltham argued that the anomalies are "not explainable by any known phenomenon in Loch Ness" and taken together, constitute "the first indisputable sighting of something very big and unexplained that's in there."