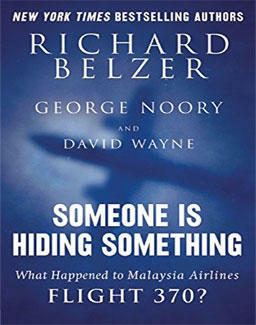 New Book: "Someone Is Hiding Something"

A year after the disappearance and commencement of the international search for Malaysia Airlines Flight 370, no sign of the plane has been found—no debris, no bodies, no sign of the much-talked-about black box. In their new book, Richard Belzer, George Noory, and David Wayne seek to find out why.

Scrutinizing the theories the media and politicians claim are the "most likely" reasons the plane crashed, Belzer, Noory, and Wayne argue that if a year after a huge Boeing 777 has gone missing, and there's still no sign of it whatsoever, it's time to think outside the box. To be published on February 17, 2015, you can pre-order "Someone is Hiding Something: What Happened to Malaysia Airlines Flight 370?" now.