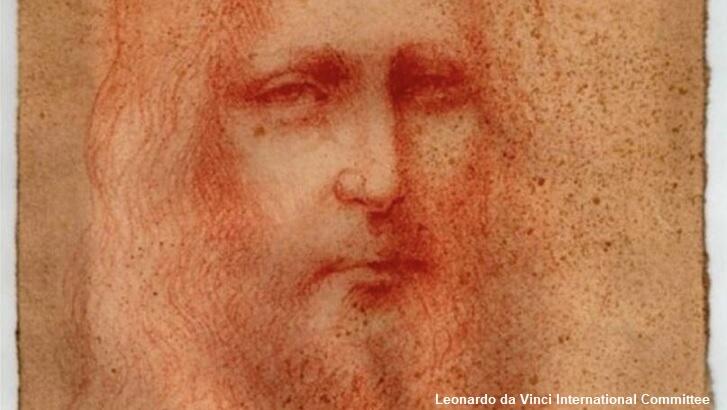 An art scholar in Italy believes that a recently unearthed sketch of Jesus Christ is a lost work from Leonardo Da Vinci. The intriguing drawing had reportedly been hidden away in a private collection for centuries until it was shown to Da Vinci scholar Annalisa Di Maria, who examined the piece and concluded that it had been created by the legendary Renaissance painter. "It is a remarkably beautiful and refined work," she marveled, "and I’m absolutely convinced it is a sketch by Leonardo."

Specifically, Di Maria points to how the "rendering of the beard is practically identical to Leonardo's self-portraits, as are the eyes." She also observed that "the posture of Christ is typical of Leonardo, who rarely drew figures front-on but from an angle." Additionally, Di Maria noted that the drawing was done using red chalk, which was the preferred medium that the painter used for his sketches. Taken together along with a dating test on the paper which indicates that it is from the 16th century, she told a French newspaper, the piece "recalls everything in the drawings of Leonardo: it is his language, and speaks loud and clear."

However, as one might imagine given the blockbuster nature of Di Maria's hypothesis, not everyone in the art world is on board with her analysis. In response to the Da Vinci scholar's announcement, Oxford University art professor Martin Kemp offered a more cautious take on the matter, saying that "I'm not dismissing it but it has got a long way to go. It would be dangerous to write it off but even more dangerous to accept it at this point." He opined that an independent analysis of the drawing as well as verification of the scientific dating on the paper are critical factors in determining whether or not the famed Renaissance painter created the sketch.

One detail which may provide a significant clue, Kemp argued, is if academics looking at the sketch can ascertain whether or not it was crafted using the left hand, since "Leonardo drew everything with his left hand." Even if that mystery can be solved, Kemp mused, it is entirely possible that the drawing was done by one of Da Vinci's students as "there is quite a crop of paintings of Christ and Salvator Mundi that were produced by followers of Leonardo." Undoubtedly, the sketch will now be subject to intense scrutiny from art experts around the world looking to either confirm or debunk Di Maria's declaration. Should the former scenario wind up happening, the drawing would most certainly fetch an enormous sum of money were it to go up for auction.