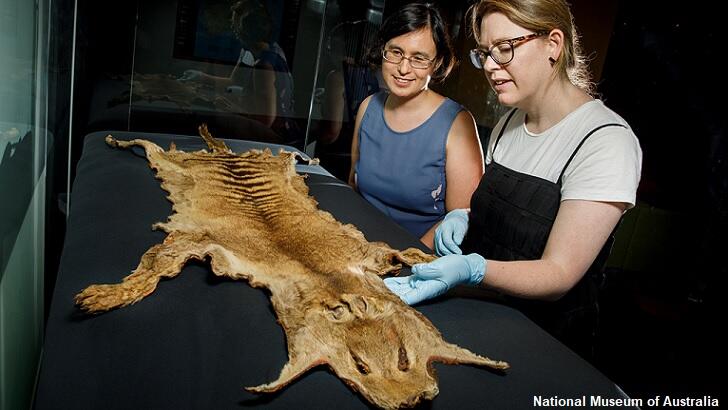 An extremely rare pelt from a Tasmanian Tiger that was only recently discovered a few years ago has provided scientists with new insights into the extinct creature. The existence of the remarkably well preserved thylacine skin first came to light in 2017 when a researcher spotted it at a taxidermy shop. Recognizing the significance of the find, the National Museum of Australia eventually acquired the pelt last year for the princely sum of approximately $180,000 American dollars.

Now safely in the hands of researchers at the museum, the long-lost Tasmanian Tiger skin has reportedly begun to give up its secrets. What makes the pelt of particular interest to scientists is that it had been sitting in a drawer for decades which kept it from being exposed to the elements. Conservator David Thurrowgood marveled at how, unlike other thylacine skins found in museums, the fur of the piece is quite vivid and not faded at all. "The rich chocolate browns on the stripes and honey colors, down to really beautiful greys on the underside of the animal," he observed, "indicate how beautiful it would have been."

On a scientific level, Thurrowgood was able to do an extensive examination of that fur and determined that the Tasmanian Tiger possessed "eight different types of hair." Perhaps the most enlightening aspect of that analysis was that one type of hair found on the creature was actually hollow. Thurrowgood likened that unique fur to that of "species who live in the cold and use those fine pockets of air to keep themselves warm and be well adapted to the Tasmanian climate."