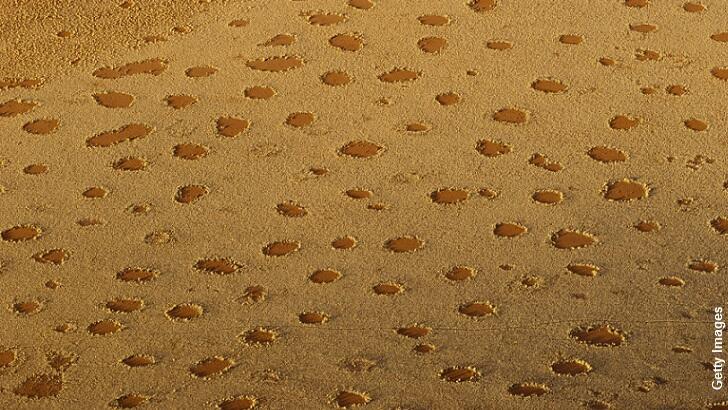 Once thought to be exclusive to the deserts of Namibia, a fresh patch of 'fairy circles' discovered in Australia may prove to be the key to deciphering the mysterious phenomenon.

The puzzling circular patches of dry land amidst otherwise normal vegetation, dubbed 'fairy circles,' have vexed scientists for decades and prompted a number of colorful theories as to their origin.

Native cultures in Namibia attributed the phenomenon to the footprints of gods or, alternatively, the deadly breath of an underground dragon.

In modern times, UFO enthusiasts saw an interstellar source for the circles and suggested they were somehow related to the ET phenomenon.

But with the new discovery of fairy circles in Australia's outback, researchers may finally be able to solve the mystery of the rings.

Based on their examination of the newfound fairy circles, they found that the vegetation growth appears to conform to a hypothesis that the rings are caused by plants naturally organizing themselves in the best way possible to obtain water.

Although they conceded that the mystery is not entirely solved, the fact that both the Namibian circles as well as their Australian counterparts appear to form for the same reason bolsters the self-organization theory.

While the decidedly prosaic source for the circles may be a disappointment to some paranormal enthusiasts, eliminating a deadly underground dragon as the origin of the phenomenon is probably a good thing for everyone.

Truth seeker Ole Dammegard joins Richard Syrett (Twitter) to discuss Operation 40, an assassination squad acting on behalf of the U.S. shadow government. According to Dammegard, Operation 40 came into existence with JFK's murder, and the current...