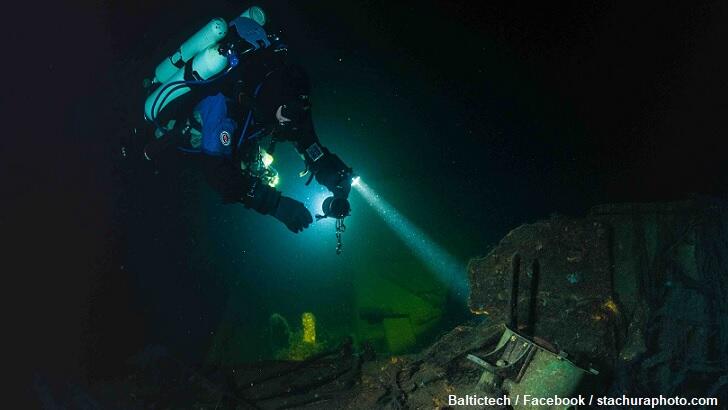 A surprising new setting in the longstanding search for the legendary lost Amber Room has emerged as divers exploring a recently discovered sunken Nazi ship say that it could contain the elusive treasure. Infamously stolen from a Russian palace by the Third Reich and then lost during the chaos at the close of WWII, the ornate gold and amber paneling has been the subject of countless expeditions over the years by researchers hoping to locate the riches in various spots throughout Europe. While most modern searches have centered around underground bunkers that had been untouched for decades and ultimately proved to be futile, the latest candidate for the location of the Amber Room is actually underwater.

After a year of looking for the missing steamer ship dubbed Karlsruhe, a team of divers manage to locate the downed craft off the coast of Poland back in April. In announcing their find this week on Facebook, the group explained that the sizeable vessel had departed from East Prussia in 1945 as part of a massive evacuation mission by the Nazis as Russian forces closed in on the area. Intriguingly, the ship's point of departure was the city of Konigsberg, which just so happens to be the last place that the Amber Room was seen.

Although that alone may not be enough to pique the interest of treasure hunters, the dive team also revealed that the newly discovered shipwreck is "practically untouched" and that among the 360 tons of cargo still contained inside the vessel are "many crates with unknown contents." Cautioning that they "don't want to get excited," the group observed that "if the Germans were to take the Amber Room across the Baltic Sea, then Karlsruhe Steamer was their last chance." With that in mind, the divers plan to continue exploring the shipwreck in the hopes that some of those unopened boxes just might contain the long-sought-after treasure.