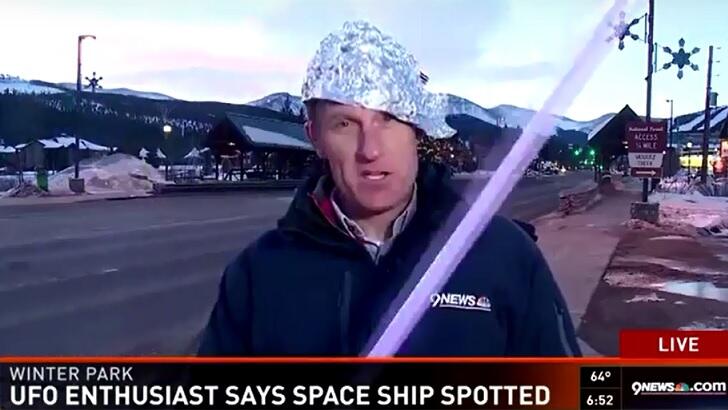 Newscast Has No Love for UFOs

In a sure sign that it's February sweeps, a TV station in Colorado recently featured a segment on a UFO sighting at a ski resort that is sure to raise the ire of flying saucer fans.

Denver's KUSA dispatched their field reporter Matt Renoux to the Winter Park Ski Area, where the resort's PR director responded to a MUFON report from someone who had spotted an anomalous flying object on a webcam watching the mountain.

Unfortunately, the public relations 'guru' opted to talk about the case while wearing a tin foil hat, so that everyone could be sure that he didn't take the story seriously at all.

"We know, through our own research, that aliens really love snow," Steve Hurlbert 'cleverly' quipped to KUSA.

After the feature detailed the admittedly strange rumors that the mountain is actually an alien base, various skiers shared their thoughts on what the UFO may have been.

Two visitors dismissed the sighting as either a garbage bag or a drone, while one skier expressed a belief in UFOs before laughing because, of course, that's just crazy.

Wrapping things up, Renoux reappeared on screen clad in his own tin foil hat and wielding a lightsaber, pushing the ridiculousness of the entire report all the way to 11.

What makes the KUSA segment particularly disheartening is that the station never bothered to enlist a meteorologist, a skeptic, or anyone who may have been able to explain or offer a suggestion for what the UFO may have been.

Instead, they simply mocked the very idea of UFOs in a textbook example of the infamous 'giggle factor' that has plagued serious research of the enigma since it burst on the scene decades ago.

While any honest researcher will admit that the phenomenon is rife with absurdities worthy of a good chuckle, in the case of KUSA's coverage, they clearly opted to laugh at UFO enthusiasts rather than with them, which is a disappointment.

It's also an unfortunate indication that, in an increasingly sensitive world, there's apparently still one group that it's okay to make fun of: 'UFO buffs.'