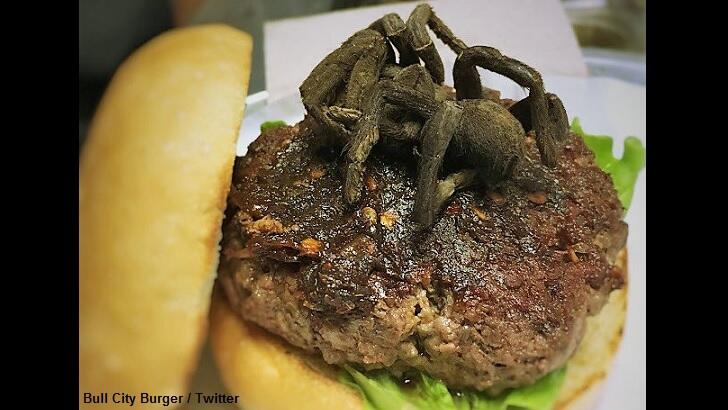 A North Carolina restaurant has conjured up a rather creepy creation available to a few 'lucky' customers in the form of a tarantula-topped burger!

The arachniphobe's nightmare is the brainchild of Durham's Bull City Burger and Brewery as part of their annual 'Exotic Meats Month.'

The rotating menu features a variety of interesting selections, such as rabbit, python, and camel, but it's the 'spider burger' that has taken the festivities by storm.

Aside from the sheer outrageousness of the meal, the tarantula-topped burger is also something of a rarity as the restaurant is only serving one per day.

Customers looking for the chance to chow down on the eight-legged oddity must enter a raffle and, should their number be pulled, are given a mere 48 hours to claim their spot at the spider table.

Provided they eat the entire burger, which sells for $30 dollars, the daring diners will receive a commemorative t-shirt celebrating their feat and also have to endlessly answer the question of what the tarantula tastes like.

To that end, those who have picked up the gourmet gauntlet say that it resembles some kind of shellfish, which, we guess, is better than tasting like chicken.

Martha did it yesterday, Randall did it today, and now it's David D's turn to give it a shot!

David D. ticket # 907656 give us a call and claim your tarantula burger. pic.twitter.com/rZh5cvTHKB