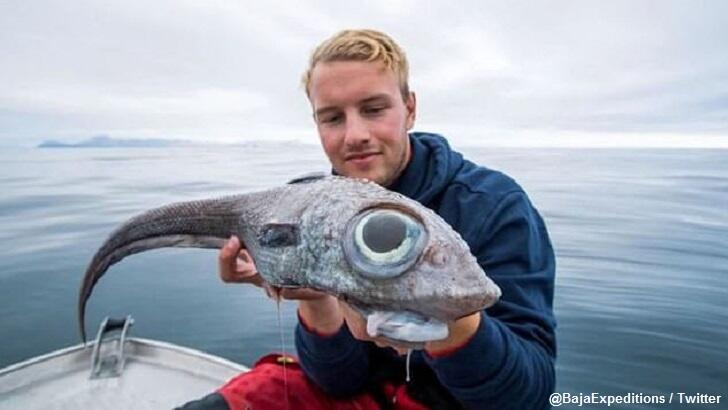 A young man fishing off the coast of Norway reeling in a rather jaw-dropping catch in the form of a fish sporting enormous eyes. Oscar Lundahl reportedly snagged the odd creature during a recent deep-sea fishing trip near the Norwegian island of Andoya. Although the aim of the outing was to catch some halibut, a different denizen of the deep wound up being the talk of the trip.

According to Lundahl, he had four hooks on one line that was submerged a whopping 2,600 feet with some mackerel attached as bait. When he suddenly "felt something quite big" tug on the line, the fisherman began furiously reeling in the catch in a fight that lasted an astounding 30 minutes as he pulled what he thought would be a halibut to the surface of the water.

Much to his profound surprise, Lundahl soon saw that he had caught a bizarre-looking fish that boasted a pair of monstrous eyes. Although he had never seen anything quite like it before, his colleague had and identified it as a species known as a ratfish. Alas, the creature did not survive its encounter with Lundahl, but thankfully did not go to waste as the young man subsequently ate the fish which he described as "a bit like cod, but tastier."