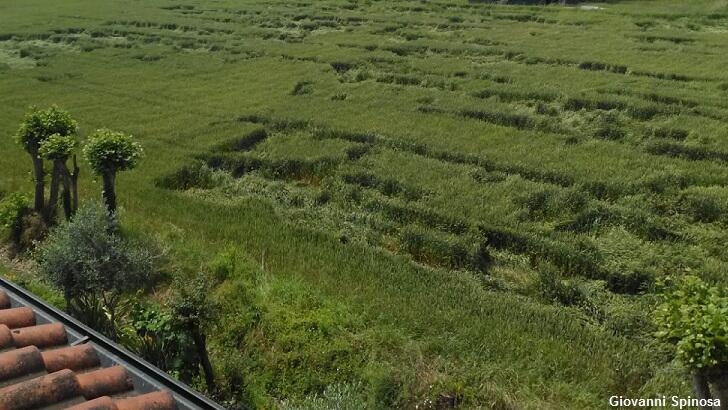 An Italian farmer woke up to a bewildering sight last week when he noticed that a series of strange formations, for lack of a better term, had appeared overnight in his wheat field. The proverbial 'crop circles,' located in the community of Romano di Lombardia, are particularly odd because they do not seem to form any kind of picture or design. Instead, they appear to be simply scattershot patches of wheat that have been inexplicably pressed down to the ground with no discernible rhyme or reason.

The man who spotted the oddities, Giovanni Spinosa, told an Italian media outlet that nothing out of the ordinary stood out during the night that the formations were ostensibly formed in the field outside of his house. It was only when he and his wife began their morning that they realized something was amiss. "We looked out the window and we saw the field in this state," he said, "with these sort of drawings."

The curious condition of the field immediately made Spinosa think of the infamous crop circle phenomenon, since a number of such formations had appeared in a nearby area of Italy a few years ago. As to what may have caused the damage to his field, the farmer did not offer a guess, but did muse that "I would tend to exclude that it was the wind." While the media outlet initially reporting on the incident was dismissive of the potential paranormal connection to the case, Spinosa offered up one intriguing clue which may be of interest to crop circle enthusiasts.

According to him, when he observed the downed wheat up close, Spinosa saw that "the ears are not broken, only folded." This detail is rather striking since such bending of crops is often cited by researchers as a distinguishing difference between genuine designs, which display the strange folding, from manmade creations, which generally do not. This puts a rather puzzling twist on the case as it would seem to suggest that whatever forces form 'classic' crop circles were also behind the 'work' in Spinosa's field.