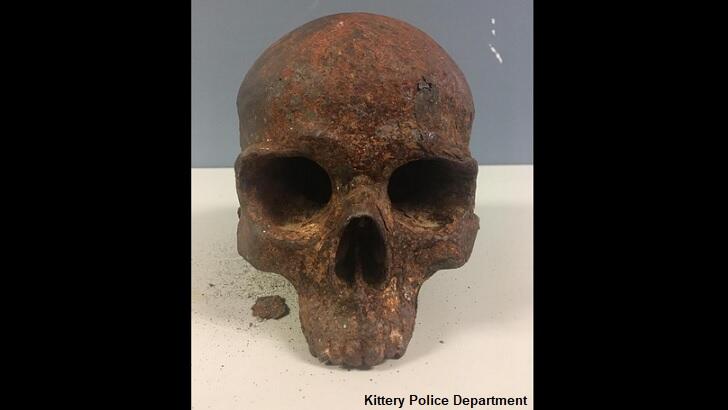 A woman walking along a beach in Maine made a rather unsettling discovery in the form of an eerie-looking metallic skull sitting in the sand. According to a local media report, the curious object was found this past Tuesday evening in the town of Kittery when resident Serena Galleshaw took a break from riding her bike to stretch out along the shoreline. It was then that "something caught my eye in the sand."

When Galleshaw ventured over to the object, she was surprised to see that it was a skull. Initially fearing that she had stumbled upon some human remains, Galleshaw was relieved when she got a closer look at the oddity and determined that it was, in fact, made out of metal. She subsequently scooped up the skull, which she described as fairly heavy, and turned it over to the local police department.

Asked about the object by a local newspaper, Sgt. Josh Stewart of the Kittery Police Department said that "it's a metal skull, you can see the machine marks on it" and mused "nothing too extraordinary." His oddly nonplussed response leaves us wondering what other kinds of weird items the officer has come across if a metallic skull is deemed to be mundane. The department is currently holding onto the skull for the time being to see if anyone claims it and, should no one come forward, Galleshaw would presumably be allowed to keep it should she want to.

While the composition of the skull may not be a mystery, the questions of how and why it wound up on the beach remain unanswered. Intriguingly, Galleshaw expressed doubt, due to how heavy it is, that it simply washed ashore. As such, she put forward the interesting theory that "perhaps this is a Maine version of the Florida man dressed up as the grim reaper protesting that the beaches are reopening."