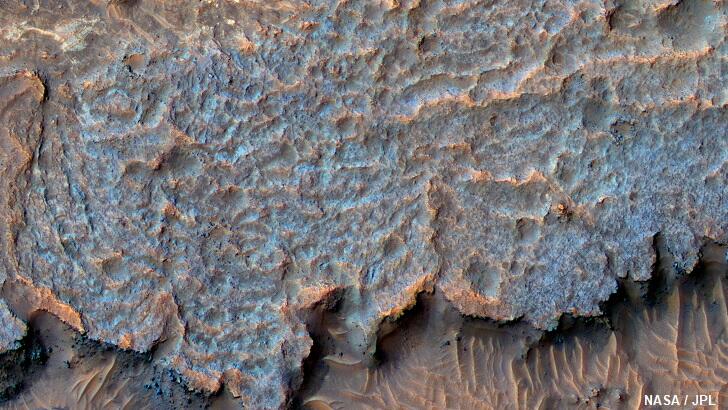 Proving once again that finding anomalies on Mars is not merely the domain of rogue researchers, NASA recently shared an image of the Red Planet which shows some strange ridges that even they can't explain. The photograph was taken by the Mars Reconnaissance Orbiter's HiRise Context camera and, under the tantalizing title "what is this stuff," posted online over the weekend by University of Arizona scientists, who operate that particular instrument aboard the satellite.

The 'stuff' in question is an area of the Martian surface where the land has taken on a ridged appearance and is described in the post as "puzzling." According to the post, the anomalous feature of the Red Planet is located on the "plains near Aureum Chaos." Offering their best guess for how it came to be, the researchers put forward a scenario in which "layered sediments were deposited by water or airfall." In turn, "a crudely polygonal patterned ground was created by stresses in the sediments."

Following that, they theorize, groundwater "deposited minerals that cemented the sediments" and "billions of years of erosion by the wind" finished the process which created the feature on the Martian landscape that caught the attention of the space agency. To their credit, the scientists behind the post were refreshingly honest about the hypothesis they presented, musing "of course, this story is almost certainly incomplete if not totally wrong."