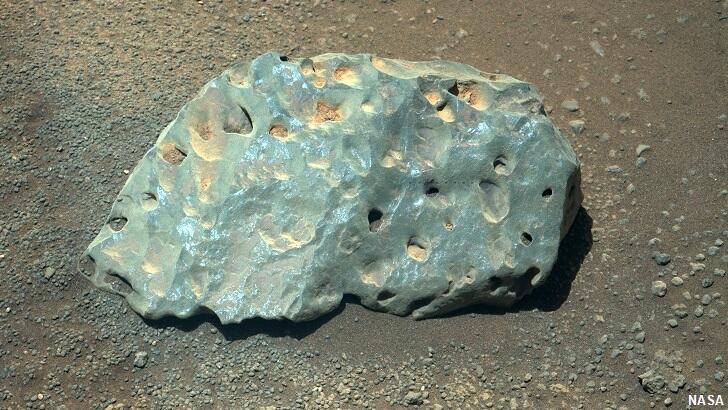 NASA's Perseverance Mars Rover recently spotted a curious rock that has left scientists at the space agency scratching their heads. An image of the greenish-colored oddity was shared on the official Twitter account of the spacecraft last week. Explaining that the rock was noticed while NASA focused on preparing for the impending launch of the Ingenuity helicopter, the account explained that the strange and somewhat shiny stone, which measures approximately six inches long, "has my science team trading lots of hypotheses."

Specifically, the team behind the rover's social media account said that the scientists have speculated that the rock could be "something weathered out of the local bedrock" or perhaps "a piece of Mars plopped into the area from a far-flung impact event." The team also put forward the possibility that it is a meteorite, but left the proverbial door open for an alternative solution by musing that it could have some other explanation yet to be offered.

Fortunately, the nature of the rock may not be a mystery for very long as the account noted that "if you look closely, you might spot the row of laser marks where I zapped it to learn more." The instrument referenced by the rover is part of the spacecraft's SuperCam apparatus, a complex unit consisting of cameras, spectrometers and a laser. By blasting the mystery rock with its beam, a portion of the object will melt and produce a cloud of material for analysis to determine the composition of the puzzling find.