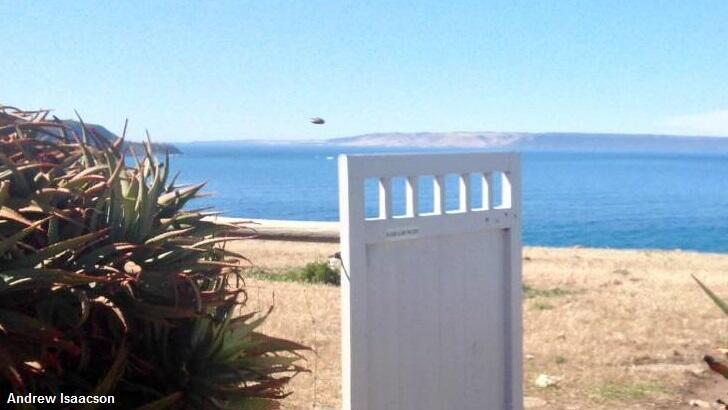 A man vacationing in Australia last week was amazed to discover that he had photographed an odd UFO zipping through the sky. According to a local media report, Andrew Isaacson was visiting Kangaroo Island when the strange sighting occurred. While taking pictures at a popular lighthouse at the location, he "saw something out of the corner of my eye" which "moved silently and exceptionally quickly."

Upon returning to his hotel room that evening, Isaacson went about looking through the photos he had taken earlier in the day and was surprised to see that he had, in fact, taken a picture of the mysterious "something." The object in question, which he estimates to have been around 650 feet away from him, appears to be rounded on one side, although the anomaly is admittedly rather ambiguous in the image.

For his part, Isaacson theorized that the object could have been a drone based on the way in which it flew. Another possibility, aside from ETs visiting the island in search of kangaroos, is that the oddity was a bird made to look exotic by being captured in the photograph while in mid-flight. What's your best guess for the nature of the strange interloper in Isaacson's image? Let us know at the Coast to Coast AM Facebook page.