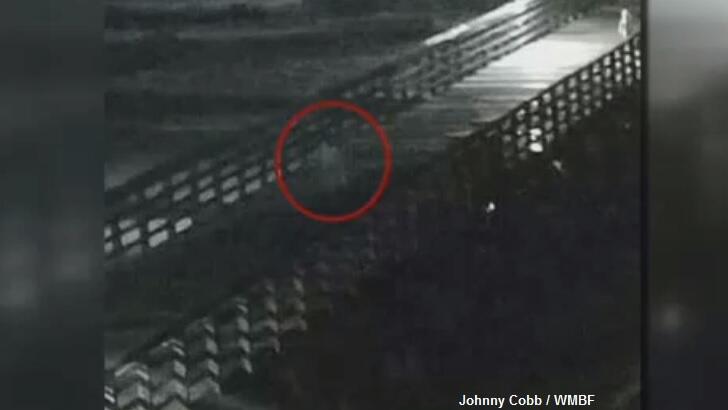 A photo from a couple vacationing in South Carolina is causing a stir online as some suspect that it features a ghost which could be a harbinger of bad things to come. The intriguing image was taken by a man named Johnny Cobb during a visit to the beach community known as Cherry Grove. From the location where they were staying, Cobb and his companion had a fantastic view of a long pier which stretches out into the ocean and decided to snap some pictures of the sight while standing out on the balcony of their hotel room.

It was only later, Cobb told a local TV station, that they noticed something rather spooky had appeared on one of their photos. In the image, an eerie anomaly that looks like an apparition can be seen seemingly walking along the pier. For his part, Cobb merely marveled that the oddity was "strange," but wasn't quite ready to proclaim that it is a ghost. Nonetheless, numerous other observers online have come to that conclusion and some suspect that there could even be a troubling twist to the story.

A local ghost tour operator named Mike Neff noted that there is a long history of spirits said to reside along the stretch of beach, known as the Grand Strand, that includes Cherry Grove. Although most of them are your run-of-the-mill area legends found in communities across the country, there was one in particular that may be cause for concern to some superstitious South Carolinians: the Grey Man.

According to lore, this apparition is believed to appear along the beach in the days before a hurricane hits the coast. Considering that storm season is currently underway, this may be one instance where the skeptic's response that the 'ghost' is a trick of light and shadow would be preferred rather than it really being the Grey Man. To that end, what's your take on the spooky photo? Let us know at the Coast to Coast AM Facebook page.