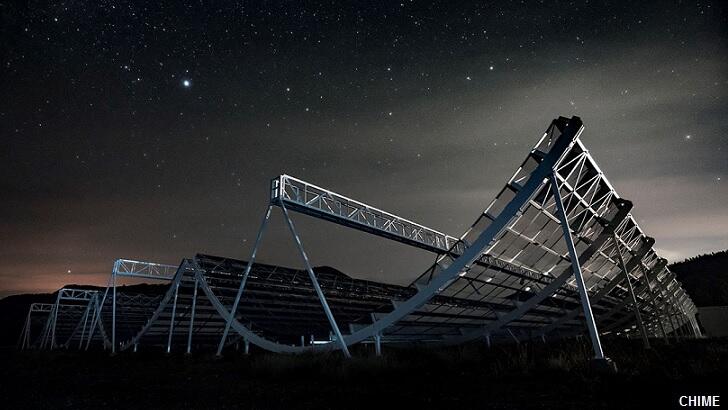 A staggering 535 fast radio bursts (FRBs) were reportedly detected by a new telescope in Canada over the course of its first year in operation. Constituting something of a space mystery, since their source is uncertain, the enormously powerful flashes of radio waves that last for mere milliseconds have captivated the astronomical community since first being discovered in 2007. Although initially thought to be fairly rare, research into FRBs over the last 14 years has revealed that they are actually somewhat commonplace in space, albeit hard to detect due to their fleeting nature.

Up until this week, approximately 140 of the puzzling pulses had been detected and now that number has increased exponentially thanks to the newly operational Canadian Hydrogen Intensity Mapping Experiment (CHIME) radio telescope. During its first year in operation, the facility managed to spot a jaw-dropping 535 FRBs, effectively quadrupling the total number of fast radio bursts known to scientists. By way of that massive slew of fresh data, researchers were able to confirm that there are two distinct types of FRBs: repeating and one-off bursts. Of the former class of fast radio bursts, CHIME was able to find 18 distinct spots in space that are producing the enigmatic pulses.

"FRBs are really hard to see, but they're not uncommon," explained MIT astrophysicist Kiyoshi Masui, who worked with the team at CHIME, "if your eyes could see radio flashes the way you can see camera flashes, you would see them all the time if you just looked up." Research into fast radio bursts has also led to an intriguing insight in that the pulses are impacted by gasses and plasma that they pass through on their way to the Earth. As such, Masui observed, each FRB "carries a record within it of the structure of the universe. Because of this, we think that they are going to be the ultimate tool for studying the universe." While the cause of fast radio bursts continues to elude astronomers, one hopes that an answer will arise as more and more of the mysterious pulses are found.