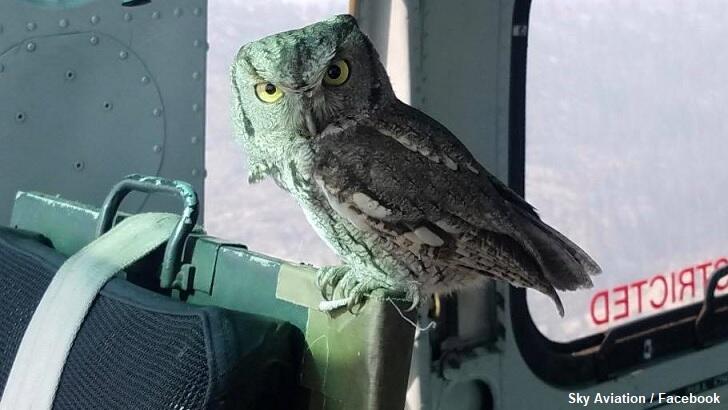 The pilot of a helicopter fighting California's wildfires could not believe his eyes when an owl flew into the craft while it was in mid-flight and stayed aboard for quite some time. The wild moment reportedly occurred earlier this week as Dan Alpiner of Wyoming's Sky Aviation was dropping loads of water onto the Creek Fire which has devastated California. Suddenly, to his profound surprise, he was joined by an unexpected co-pilot in the form of an owl.

In a post on the company's Facebook page, they explained that "it's odd to have an owl enter an aircraft. It's unheard of to have it enter while the helo is in-flight." They went on to marvel "it’s an unexplainable and magical miracle for it to stay with you for several water drops, then leave just as it arrived - safe and unannounced." Fortunately, the pilot was able to snap a picture of the creature as it perched on a seat next to him, although he only got the one image because "it’s not easy to fly a mission and be a photographer at the same time."