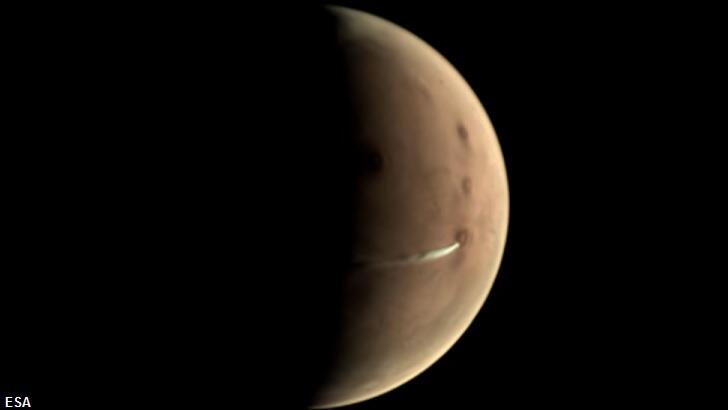 The discovery of an odd and massive cloud lingering in the atmosphere of Mars has sparked a rather fantastic suggestion for its origin. The weird find was announced by the European Space Agency last week when they released an image of the atmospheric wonder and shared some details about its nature. According to ESA, the cloud measures a whopping 900 miles long and is located relatively close to a volcano known as Arsia Mons.

The space agency went on to explain that the formation is a "seasonally recurrent water ice cloud" which was made more vibrant, so to speak, due to a dust storm which occurred on the Red Planet this past summer. While the nearby volcano isn't directly responsible for the cloud, per se, wind currents sweeping past the sides of the mountainous location and whipping up dust at different times of the Martian day do play a role in shaping its appearance.

Despite the fairly solid scientific explanation for the seemingly strange cloud, conspiracy theorists and Mars anomaly hunters have offered their own opinions on its origin. Noting the proximity of the formation to Arsia Mons, imaginative observers have argued that it is not a cloud at all and, in fact, it is a plume of smoke coming from an eruption of the volcano.

To that end, suspicious observers say that this is simply being covered up by the 'powers that be,' since the Red Planet's atmosphere should not allow for such fiery scenario to occur and, according to astronomers, the volcano actually went dormant 50 million years ago. As such, although we'd love to believe that the cloud represents a proverbial Mars-shattering development, we're going to have to take ESA's word for what it is unless future images show some serious lava flow in the area.