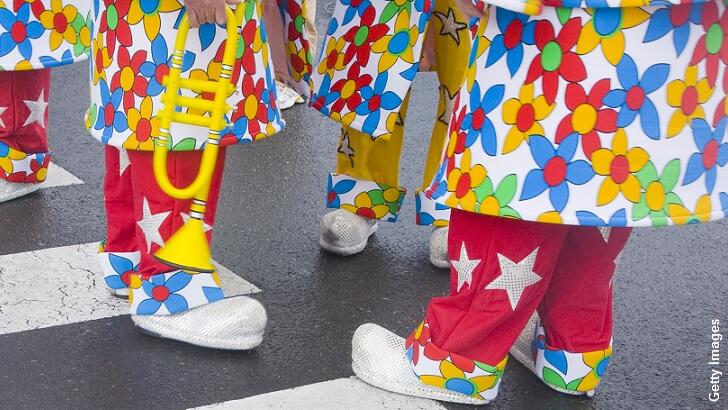 As the third week of the Carolina clown craze comes to a close, the panic continues to sweep across the south with even more troubling incidents reported throughout the region.

After originating with a spate of clown sightings at an unassuming apartment complex in South Carolina at the start of the month, the hysteria has quickly spread in subsequent weeks, first to neighboring North Carolina and now to other other nearby states.

In Alabama this week, two schools had to be closed for the day following threatening Facebook posts from a person known as 'Flomo Klown.'

Meanwhile, a pair of individuals in Georgia were arrested for filing false police reports concerning clowns in a white van lurking in their neighborhood.

Despite the arrests, it appears there were additional legitimate sightings in the state as a mother in Macon reported that her kids were terrorized by clowns wielding lasers!

Similar to the situation in Alabama, other children in the Macon area also report getting harassing messages on Facebook from clowns.

The craze has also spread to Florida as authorities in Pensacola say they've gotten reports of people donning the greasepaint simply to scare people for fun as well as other simply making prank clown sighting videos.

Even Stephen King has chimed in on the strange sensation sweeping the nation, telling the Huffington Post, that the panic will pass and then likely return again in the future.

The legendary horror writer is almost certainly correct and, based on the latest reports, it appears that we may have hit 'peak clown,' since the panic has seemingly moved on to copy cat pranksters, meaning the meme could likely fade away soon.

Until the next time the phantom clowns come calling, of course.