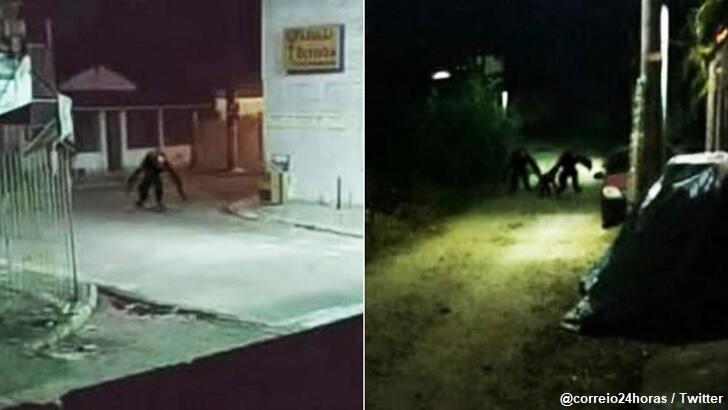 A pair of curious photographs purportedly emanating from Brazil have caused something of a stir on social media in the country as the images appear to show mysterious bipedal creatures roaming the streets of a community. According to a local media report, the curious pictures appeared online in Brazil earlier this month and quickly spread like wildfire. The story that became attached to the photos is that they were taken at a beach pavilion by the name of Ilha de Misericordia on the island of Itaparica.

In the first of the two images, a diminutive creature sporting noticeably long arms and somewhat resembling a chimpanzee can be seen standing in a street. The second photo shows what one assumes are two adults and a juvenile creature, all of which also look fairly small and rather ape-like, though they are cast in shadow. People sharing the photos online in Brazil claim that these 'monsters' prowl the streets of Ilha de Misericordia, which has led some to suspect that this is a clever way of trying to scare residents into adhering to a coronavirus-related curfew in the community.

Another theory for the nature of the creatures is that they may possibly be wild chimps or some other kind of diminutive primates that had their curiosity piqued by the barren pavilion and decided to explore the area. And, of course, there are imaginative observers who already contend that the mysterious interlopers are of the cryptid variety as well as, understandably, skeptics who contend that the photos are probably just a hoax.

To that end, a photo analyst enlisted by a media outlet in Brazil determined that, at the very least, the photos were not doctored in any way and that they were likely taken recently. However, there appears to be Arabic writing on a sign in the first photo, which would apparently upend the entire tale that the pictures were taken in Ilha de Misericordia. With that in mind, there's a high likelihood that, as is often the case with such viral images, the story surrounding the photos is a fabrication that took on a life of its own before anyone could figure that out.