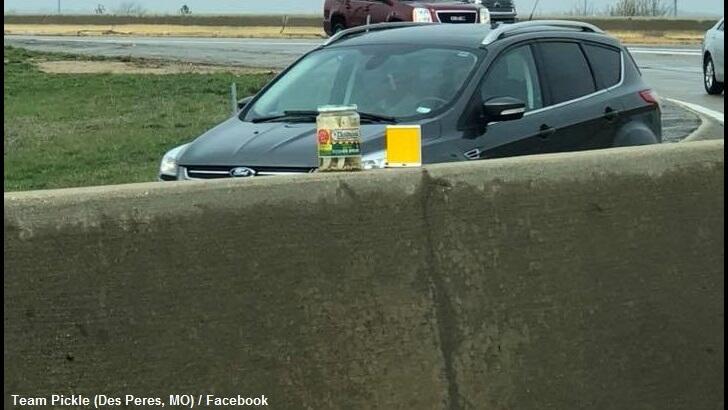 A highway ramp in Missouri has become the site of a strange mystery that has gripped observant commuters for years.

For reasons yet to be determined, someone keeps leaving a pickle jar atop the concrete barrier which separates traffic coming on and off the highway.

Believed to have begun back in 2012 if not a few years earlier, the recurring pickle jar presence has proven to be particularly perplexing to drivers passing through the town of Des Peres.

Curiosity surrounding the 'pickle mystery' has steadily grown over the years as an increasing number of drivers noticed the jar or were told of the weirdness unfolding on the highway ramp.

In fact, the pickle jar puzzle is so popular that it inspired a Facebook group where a sizeable number of users share their pictures of the enigmatic object and trade theories as to who may be behind it and why.

Since the jar keeps being replaced every time it disappears, it would seem that someone is intentionally planting the pickles, but, beyond that, no one can figure out what the message may be.

While some romantic thinkers have suggested that the jars have a deeper meaning, perhaps a gesture in honor of a lost loved one, others think that it is merely a clever commuter getting a laugh from the attention that their antics have received.

What's your theory on the Great Missouri Pickle Mystery? Let us know at the Coast to Coast AM Facebook page.