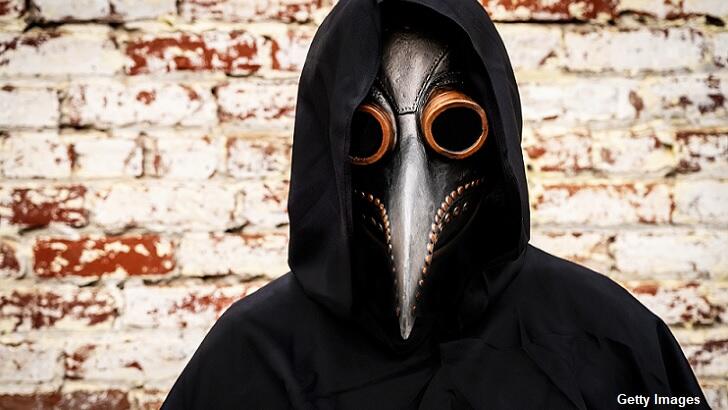 In a trend eerily similar to the creepy clown craze which swept across the globe a few years ago, reports of people dressed as plague doctors have cropped up in multiple communities throughout England over the last few days. The strange spate of sightings seemingly began in Scotland earlier this month where a young man wearing the creepy costume caused something of a stir in several towns until police caught up to him and advised him to stop scaring people. While that particular 'reign of terror' may have come to an end, it appears to have unleashed a wave of plague doctors across the United Kingdom.

Much like at the height of the clown craze, keeping track of all of the appearances by such unsettling individuals is rather difficult, especially since accounts of a 'plague doctor' appearing in a community is more often than not an online rumor spread on localized social media with varying degrees of evidence for such an individual actually being seen. That said, authorities are taking the matter seriously. For example, in the town of Cheshunt, police informed residents that they were aware of the stories going around and have stepped up their patrols, but have no reports of anyone encountering a plague doctor.

Meanwhile, in a testament to how widespread the craze has become, authorities in the town of Scunthorpe, which is approximately 163 miles away from Cheshunt, also issued a statement telling residents that there is no truth to the rumors of a plague doctor lingering around an area school and chasing children. Over 200 miles away from Scunthorpe, police in the town of Wirral acknowledged tales of "an unknown person wearing all black clothing, a cape and a black mask with a large beak similar to a crow" also being seen near a school and declared the matter to be a hoax as they "have had no confirmed sightings of any person purporting to be this character."

That's not to say that all of the purported plague doctor sightings are merely rumors as a person in the town of Kidderminster actually managed to capture a video of an individual wearing the unnerving costume. And, back in Scotland, another of the characters has been seen at least three times in the town of Dumfries. Authorities who have addressed the trend attribute it to, unsurprisingly, a fad from TikTok and, oddly enough, say that it originated in the United States, which is somewhat harder to believe since America has yet to experience a wave of plague doctor sightings in a manner similar to what we're seeing in England. That said, should the craze continue, it wouldn't be shocking if such a scenario occurred.