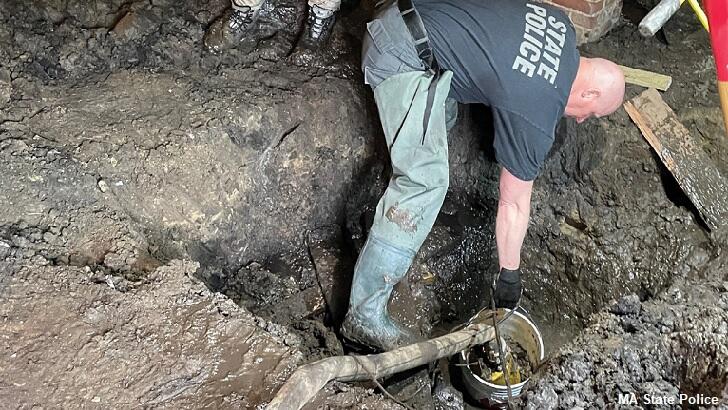 Authorities in Massachusetts were called upon to investigate the possible discovery of human remains after the crew of a paranormal television show stumbled upon something anomalous buried in a basement. According to the Massachusetts State Police, the odd incident occurred late last month as the unnamed program was filming in a building located in the city of East Bridgewater. Apparently, the production came prepared to find something seriously strange as they not only enlisted a cadaver dog as part of their team, but also possessed ground-penetrating radar.

While exploring the basement of the building, the body-sniffing pooch alerted the team to something unusual and an examination with the radar showed "an anomaly underground." Understandably, the ghost hunters suspected that they had just hit reality TV pay dirt in the form of heretofore undiscovered human remains hidden in the location and, to their credit, promptly reported the find to the cops. Upon their arrival, an emergency response team proceeded to excavate the spot where the body was believed to be buried.

However, the suspicions of the ghost hunters turned out to be a false alarm as cops dug several feet down into the ground and, eventually, "a large volume of groundwater was observed flowing through the excavated area." With that in mind, police determined that this was likely the cause of "the anomaly detected by the radar," although that doesn't exactly explain what caught the attention of the cadaver dog. Be that as it may, the state police declared the case closed and mused that it was merely "a ghost story that almost was."