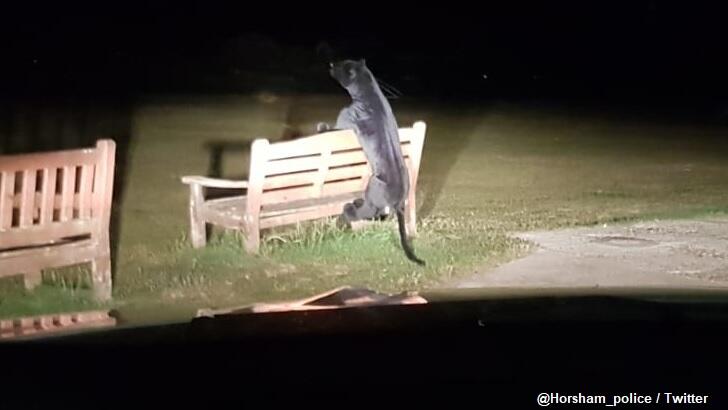 Authorities in England on the hunt for what they believed was a big cat spotted in a small town wound up discovering that the 'monstrous predator' was actually just a stuffed animal. The amusing incident occurred in the community of Steyning last week when residents caught sight of a sizeable feline seemingly climbing onto a park bench. Understandably concerned about what they were seeing, the unnerved observers promptly phoned the police to alert them to the presumably dangerous creature lurking in the area.

When cops arrived on the scene, they quickly found the creature in question and any potential danger surrounding the animal was soon diffused. "Reports of a large apex predator in the Steyning area turned out to be true," explained the Horsham Police department on Twitter while sharing a photo of the 'big cat' still lumbering onto the park bench. "It may be a stuffed toy," they wrote, "but the attending officers didn't necessarily know that at first."

It is uncertain what became of the stuffed big cat once cops realized that it was not a genuine ferocious predator, but one assumes that it was put in a location where it will not frighten the public again. Last week's case of mistaken identity follows a similar incident in England back in May wherein several armed police officers descended upon a field following reports of a tiger and soon realized that the 'beast' wast a just a life-like statue.