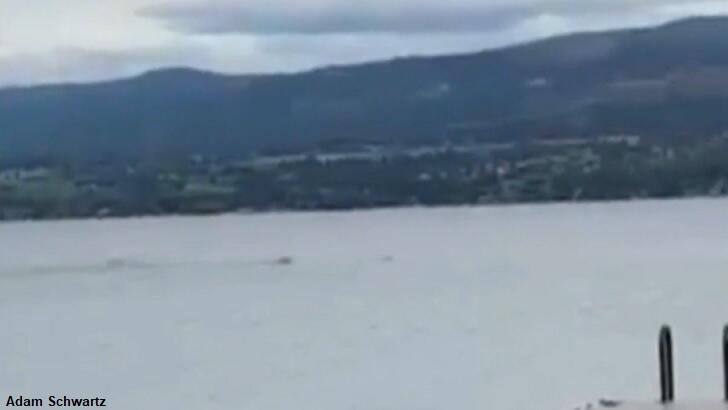 A Calgary man visiting family in British Columbia may have spotted Canada's version of the Loch Ness Monster known as Ogopogo. The potential sighting reportedly occurred last weekend when Adam Schwartz was celebrating Canadian Thanksgiving with loved ones in the city of West Kelowna. While walking along the shore of Okanagan Lake, where the legendary creature is said to reside, he noticed something peculiar about the otherwise calm water.

"All of a sudden," Schwartz recalled, "we saw this weird formation of waves that were kind of going against the current of what was coming in." After staring awe-struck at the scene for about thirty seconds, the bewildered witness decided to start filming the anomalous event, which lasted for around another half-minute and can be seen here. A frequent visitor to the site, Schwartz indicated that he is a believer in Ogopogo, but theorized that the cartoonish depiction of the 'monster' is likely inexact and postulated that it is probably a long fish that "likes to stick down low in the lake and pops up every once in a while."

While his possible sighting was the talk of the holiday weekend among his family, not everyone is convinced that Schwartz saw the famed monster. Seasoned Ogopogo researcher Bill Steciuk expressed skepticism about the report and noted that "it’s a turbulent time in Okanagan Lake. You have cold water coming up to the surface, creating all kinds of considerations." Noting that the 'creature' seen by Schwartz could have been a wave, a temperature inversion or even an odd reflection, Steciuk concluded that "I don't think it’s our friend … sometimes waves are just waves."