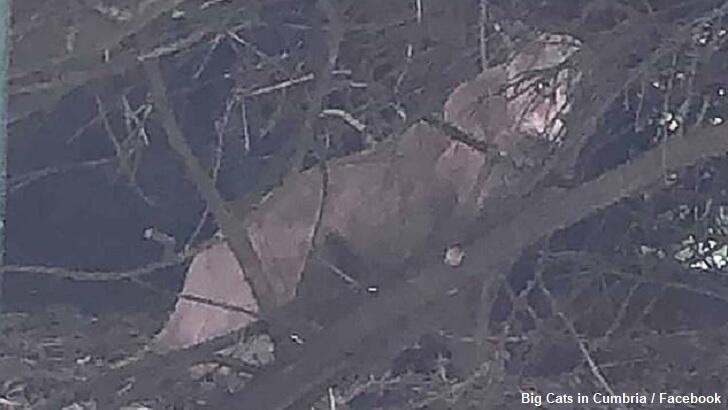 Photographs snapped by a motorist in England are being hailed as some of the best images ever taken of what may be a big cat believed to roam the British countryside. The intriguing potential puma pictures were reportedly taken by an unnamed woman in the county of Cumbria this past weekend and were posted to a Facebook page devoted to reports of such oversized and out-of-place felines in the region. In sharing the photos, group administrator Sharon Larkin-Snowden also detailed the witness' account of encountering the creature.

According to her, the incident occurred as the woman was driving to work and, along the way, noticed a huge cat feasting on a pigeon while sitting in a tree. Amazingly, she decided to get our of her vehicle to get a better look a the creature and took three rather remarkable photos of the beast. The sighting then quickly came to an end when the animal fled the scene. Thoughtfully leaving behind a chicken sandwich for the cat to eat, the woman also departed and promised to return later to see if the feline may still be roaming around the area.

"This has to be some of the best photographic evidence up-to-date," marveled Larkin-Snowden, "to get a decent photo is difficult." She went on to note that "the witness said it was muscular and the size of a collie. Either a caracal or young puma." To that end, a vigorous debate has erupted among members of the group as to what, exactly, the woman had photographed with some people arguing that the creature was merely a domesticated feline mistaken for something more ferocious and others who contend that the pictures show an infamous big cat of local lore known as the 'Beast of Cumbria.'