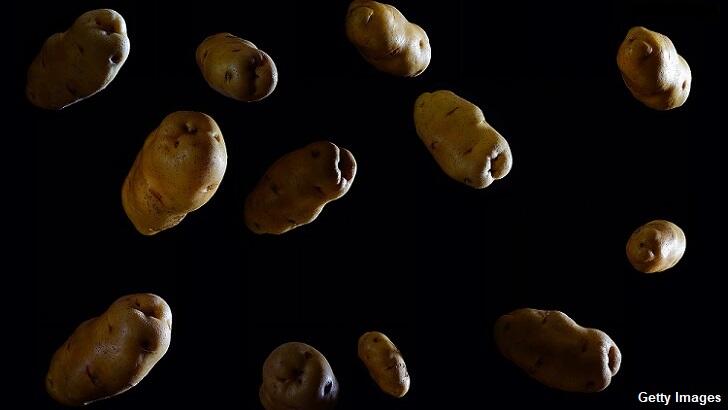 A family in India believes that some kind of supernatural force has been raining stones and, bizarrely, potatoes onto the roof of their home as well as throwing them around inside the residence. According to a local media report, the case of high strangeness started last Friday night in the community of Umtrew when Kingstar Thongni heard a knock at the door of a neighboring house where his parents live. When there was no one to be found, the family suspected that the mysterious sounds had come from some troublemakers in the neighborhood and promptly phoned the authorities.

While a subsequent search turned up no sign of anyone, things took an odd turn when stones suddenly began raining down upon Thongni's house. Confused cops on the scene could not figure out where the falling rocks were coming from and the family eventually left the home for what they hoped would be a less chaotic location. Thongni and his children returned to the residence over the weekend, where they discovered a box of potatoes had been opened and emptied.

Siince that time, their home has been pelted with not just stones, but spuds as well! Chillingly, the eerie activity is not just confined to outside the house, Thongni says, as those items as well as various other household goods have been observed flying around the residence as if propelled by unseen force. This would seem to preclude the possibility that the barrage of stones and potatoes are merely the work of pranksters outside the house.

In light of the inexplicable nature of the events in his home, Thongni and many other residents of his village suspect that the cause of the commotion is some kind of paranormal entity. While they do not specifically suggest it is a poltergeist, the incidents are in keeping with similar cases of such 'noisy ghosts' reported throughout the world. For their part, village elders offered the somewhat reassuring assessment that the perceived troubles are caused by either a deity or a supernatural being which is merely passing through the area and, presumably, will be departing soon.