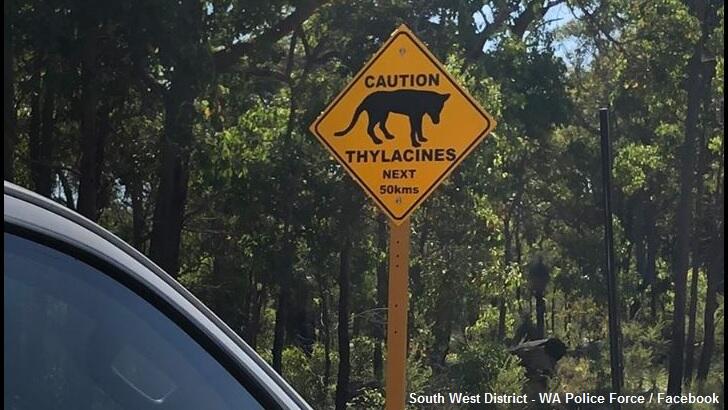 A police department in Australia got quite the chuckle when officers noticed that someone had posted a rather professional-looking sign cautioning motorists that they were entering Tasmanian Tiger country. The amusing warning, which declares 'Caution Thylacines Next 50 kms' and features a silhouette of the iconic creature, was reportedly spotted in the town of Nannup earlier this week. Of course, the joke behind the sign is that scientists contend that the creature went extinct in the 1930s, but alleged sightings of the animal sporadically occur to this day.

In fact, the region where the sign was posted is so well-known as a thylacine hotspot, boasting a whopping 50 sightings documented by researchers, that the creature has been given the localized name: the Nannup Tiger. Fortunately, the police department that discovered the sign had a good sense of humor about the warning, posting a picture of it online and announcing that they were "on the lookout for the infamous Nannup Tiger and for the person responsible for the sign, well played, sir."

The reaction on social media from local residents was overwhelmingly appreciative of the prank with several people expressing the hope that the sign will not be removed. "We got a good laugh out of it the other day," said one individual, "please leave it there, it's doing no harm and could pique the curiosity of tourists." And it would seem that the sign wound up tricking least one driver, who posted "oh my God, we were fooled!" It remains to be seen whether or not the warning will be allowed to stay where it, but it certainly appears that the community hopes that will be the case.