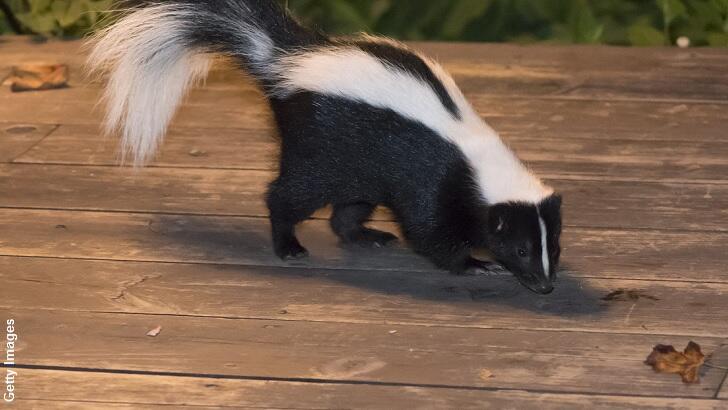 The brokenhearted owner of a runaway pet skunk hopes that a self-proclaimed clairvoyant can help locate the lost animal.

During a recent camping trip, Sarah Harris says that her 16-month-old pet skunk, named 'Dottie,' escaped from their tent and scrambled off into the wilderness of Devon, England.

Since that time, the domesticated creature has been seen a handful of times by bewildered witnesses and sprayed two dogs that it ostensibly perceived as threats.

Concerned that Dottie is not fit to be an 'outdoor skunk,' Harris has turned to a psychic who purportedly possess an ability to 'connect' with lost creatures.

When tasked with the case, Becky Willoughby claims that she almost immediately received a vision of a garden area and a nearby shed which she believed contained the wayward animal.

Although a subsequent search of the location netted some skunk scat, Dottie was nowhere to be found.

Unfortunately, aside from a few 'flashes' from time to time, Willoughby has failed to establish a strong connection with the creature since that tantalizing first attempt.

Nonetheless, Harris has not given up on the skunk search and is keeping her fingers crossed that the clairvoyant can come through with the vital information needed to ensure Dottie's safe return home.

Should Willoughby prove successful, she'll likely be able to brag about being the first psychic ever to locate a runaway skunk, which is a claim to fame that certainly doesn't stink.